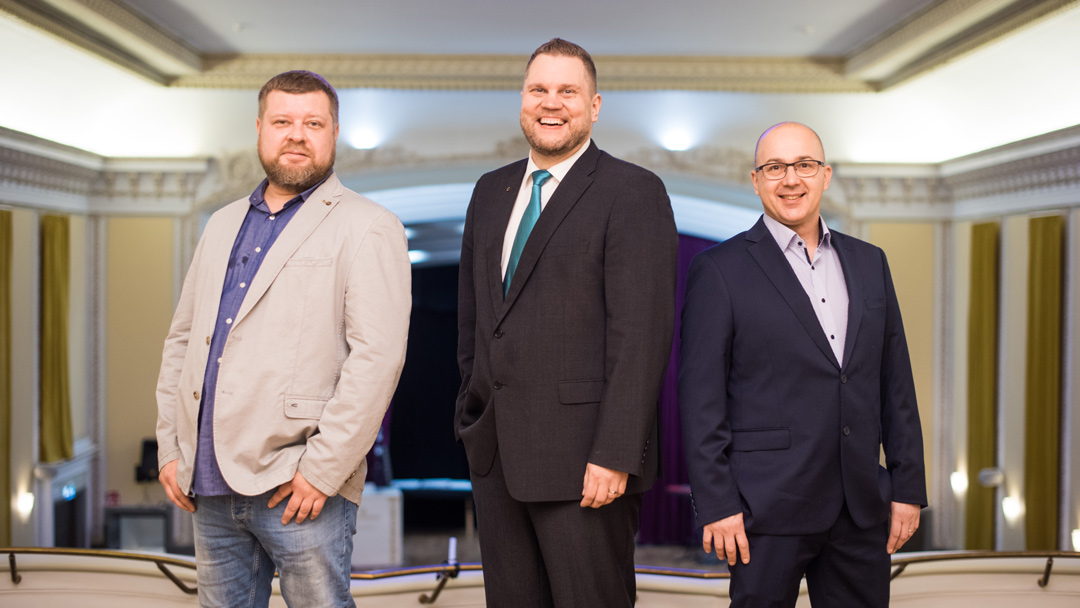 Sergei Silkin from Helsinki, Marko Oikarainen from Kouvola and Dan Wickholm from Sipoo were today awarded the Father of the Year Prize. The Prize was presented by Minister of Family Affairs and Social Services Krista Kiuru.

The Father of the Year Prize winners have promoted gender equality in family life in an exemplary manner, for example by taking family leave or otherwise taking time to take care of their children. They have found ways of supporting their children in exceptional situations and they have also raised issues related to fatherhood through their life’s work or their activities to exert influence.

The Government submitted its proposal for the family leave reform to Parliament in September. “I consider that the reform is an important step towards a more equal division of family leaves. This is an extensive overall reform. Such reforms have not previously been carried out in Finland. One of the key objectives is to increase gender equality and the amount of care provided by fathers. We want to see a more equal division of care responsibilities between women and men. We want that family leaves will be divided more equally between both parents in families,” says Minister Kiuru.

Winners of the Father of the Year Prize in 2021

Sergei Silkin from Helsinki has, through his own actions, promoted gender equality and the wellbeing of children and families both in his own family and in multilingual and multicultural activity clubs for children in eastern Helsinki. Silkin has obtained training in pedagogy. In his work, he engages in a continuous dialogue with different kinds of families about parenthood, fatherhood and the importance of being present. Silkin openly shares his own experiences of fatherhood in the Russian-speaking community and serves as an example for many parents of well-functioning joint custody when the relationship between the parents has ended. Silkin works actively to make it possible for children from low-income families to engage in leisure activities. He also explores opportunities for supporting and ensuring, for example, that children with special needs in Russia have the chance to lead a life of dignity.

Marko Oikarainen from Kouvola is a father in a multiple-birth family who works actively to improve the wellbeing of children, the position of multiple-birth families and gender equality. He took the maximum number of family leave days when their eldest child and multiple-birth children were born. Oikarainen has been involved in developing training for multiple-birth families by bringing the perspective of fathers and fatherhood into the training. He serves as an example of participatory fatherhood by joining his children in meetings and events with peer support families and contributing actively to the operation of the Finnish Multiple Births Association. Oikarainen has also contributed to the promotion of gender equality in family life by reconciling work, parenthood and family life by means of various arrangements.

Dan Wickholm from Sipoo has been actively present in his children’s lives since their birth, and he has reconciled work and family life by taking job alternation leave, for example. Due to Wickholm’s work, parenting responsibilities were divided between the parents into periods. In 2014, the mother of the family fell seriously ill, and Wickholm stayed at home to take care of their children and to ensure that the family’s daily life would be as normal and smooth as possible. Even in more difficult times, he put his children’s wellbeing and safe everyday life first. Now he is his wife’s informal caregiver and solely responsible for their children, and he also takes care of everything related to the children. He has worked hard to make the family’s everyday life at home as smooth as possible.

Father of the Year Prize

The Father of the Year Prize is awarded to a person who, through his own example and actions, has promoted recognition of the importance of fatherhood and thus increased its appreciation. The aim of the Prize is to put active fatherhood on a firmer footing in people's thinking. The goal is to strengthen fatherhood, support the reconciliation of work and family life, promote the child's best interests, and boost gender equality.

The first Father of the Year Prize was given in 2006. A total of 40 fathers, including the winners in 2021, have received the Prize.