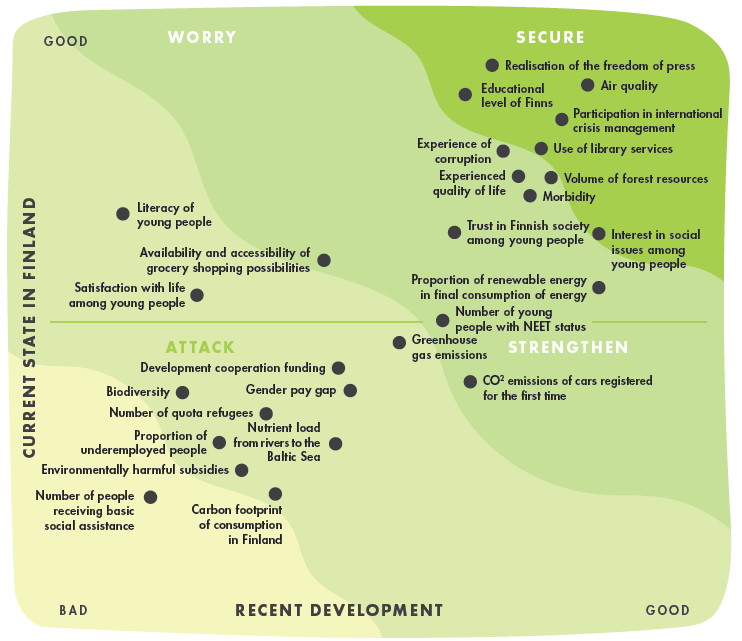 Like last year, the issue that the citizens’ panel was concerned about most was the future of young people. The panel members were especially worried about the declining literacy among young people over the past few years. According to the panel, young adults are still satisfied with their lives, but recent developments give cause for concern about the future. In the other areas, the panel members were particularly concerned about the availability and accessibility of grocery shopping possibilities.

“Reading is not only a mechanical skill, but a key to education, participation in society and also rewarding in itself.”

The environmental issues most concerning the panel members were the current state of biodiversity, the amount of environmentally harmful subsidies, the carbon footprint of consumption in Finland and the nutrient load from rivers to the Baltic Sea. Decision-makers should assess whether the current policy in these issues is functioning sufficiently well.

The panel members were of the opinion that the number of people receiving basic social assistance or working part-time involuntarily is still large and the current development does not look promising. The panel members also found the gender pay gap considerable, and the situation does not seem to be improving.

"The loss of biodiversity in Finland continues and it is worrying, especially because nature and its biota are constantly facing more threats as climate change progresses.”

Secure: We must hold on to the good quality of life

The citizens' panel stated that the current state of many issues and the recent developments in Finland are good. The panel members were particularly satisfied with the quality of life, the good level of education and low morbidity in Finland. The panel considered young people’s trust in Finnish society and their interest in societal matters to be at a good level. With regard to environmental matters, good air quality and the increasing proportion of renewable energy in the final use of energy must be ensured in the future.

“Young people are increasingly aware of the state of the world and their trust in society is increased by the fact that they have the opportunity to influence.”

The citizens' panel was concerned about Finland's greenhouse gas emissions. However, based on recent developments, they hoped it will be possible to control them even better in the future. The panel members were of the opinion that the CO2 emissions from cars registered for the first time were still too high, but recent developments in this area also give cause for optimism. The panel also believed that the efforts to reduce the number of young people not in employment or education from last year have been successful and that this work must continue.

"The car industry has also become aware of the change in demand. However, the prices and awareness are not yet at the right level. “

Citizens’ message to the Government

The online survey of the citizens’ panel was taken by some 500 Finns, of whom almost one half also participated in the citizens' panel last year. Just under one half of the respondents were between 29 and 49, 15 per cent under 29 and approximately 40 per cent over 50 years of age. The panel members’ educational background varied, and almost 75 per cent had completed a degree in higher education. Eighty-five per cent of the respondents lived in cities and densely populated areas.

The panel members assessed the state of sustainable development in Finland in 2019 through ten themes. The survey was based on the monitoring system of the state of sustainable development, the indicators of which were examined by the panel members on the basis of assessments prepared by experts and their own experiences. The starting points for the monitoring are Society’s Commitment “Finland we want by 2050”, drawn up by the National Commission on Sustainable Development, and the UN’s 2030 Agenda for Sustainable Development and its goals.

The citizens' panel provides the Government and the National Commission on Sustainable Development with information on citizens' assessments of how sustainable development is realised in Finland. The panel is organised once a year in January and new members are included every year.

Results from the citizens’ forum on sustainable development

The panel members commented on the various aspects of sustainable development, including the state of the natural and other environments and social inequality. The focus was on the state of affairs in Finland in 2018. The different aspects of sustainable development were grouped into four categories: issues where a good state must be secured in future, good developments that must be strengthened, what gives cause to worry, and where the situation is so bad that an attack is needed.

The citizens’ panel was clearly worried about the situation of the young. They felt that in many respects the current state of affairs is quite good for the young, but some of the recent developments have been poor. The respondents were worried about youth literacy, trust in society and life satisfaction. Exclusion of young people from work and education was considered a particularly serious problem. In terms of the numbers of young people excluded from work and education both the current situation and recent development were seen as negative.

"All too often the exclusion and loneliness of the young is only talked about in special occasions and political speeches. The young are the future; without them there is nothing."

Attack: The state of biodiversity calls for urgent action.

The citizens’ panel was particularly worried about the numbers of threatened plant and animal species. The respondents felt that both the current state and recent development of biodiversity are in a bad shape. Urgent action is needed to reverse the trend. The worry about decline in biodiversity is consistent with scientific research. The panellists also considered that greenhouse gas emissions should be reduced more effectively.

"One of the key missions for our nation is to protect the diversity of our unique natural environment. We should work more on this, and a lot."

Secure: Citizens’ panel trusts in the structures of society.

The panel noted that for many issues the current situation and recent development are quite good. These are the issues where we must secure a good state of affairs in future as well. In particular, the panel members would strengthen certain basic structures, including freedom of the press and experiencing corruption. In Finland we have strong institutions that are trusted by the citizens. Issues that are worth strengthening also include the health and quality of life experienced by the Finns. Of the global responsibility issues where the situation is positive the panel members mentioned Finland’s responsible trade policy and active participation in international crisis management.

"The basics are in order in Finland, freedom of the press and not much corruption. This is a good basis to build on, but it is not self-evident."

Among the indicators for positive trends are the share of renewable energy in energy end-use and lower carbon dioxide emissions from first-registered vehicles. However, more work needs to be done to reduce emissions. The panel members also felt that the global responsibility of large companies had improved in recent years. Responsibility comprises environmental and climate issues, which received considerable emphasis in the questionnaire.

"Politicians must have the courage to make bold decisions to combat climate change. Now is the time to adopt a perspective of several decades on climate change, instead of focusing on the next elections." 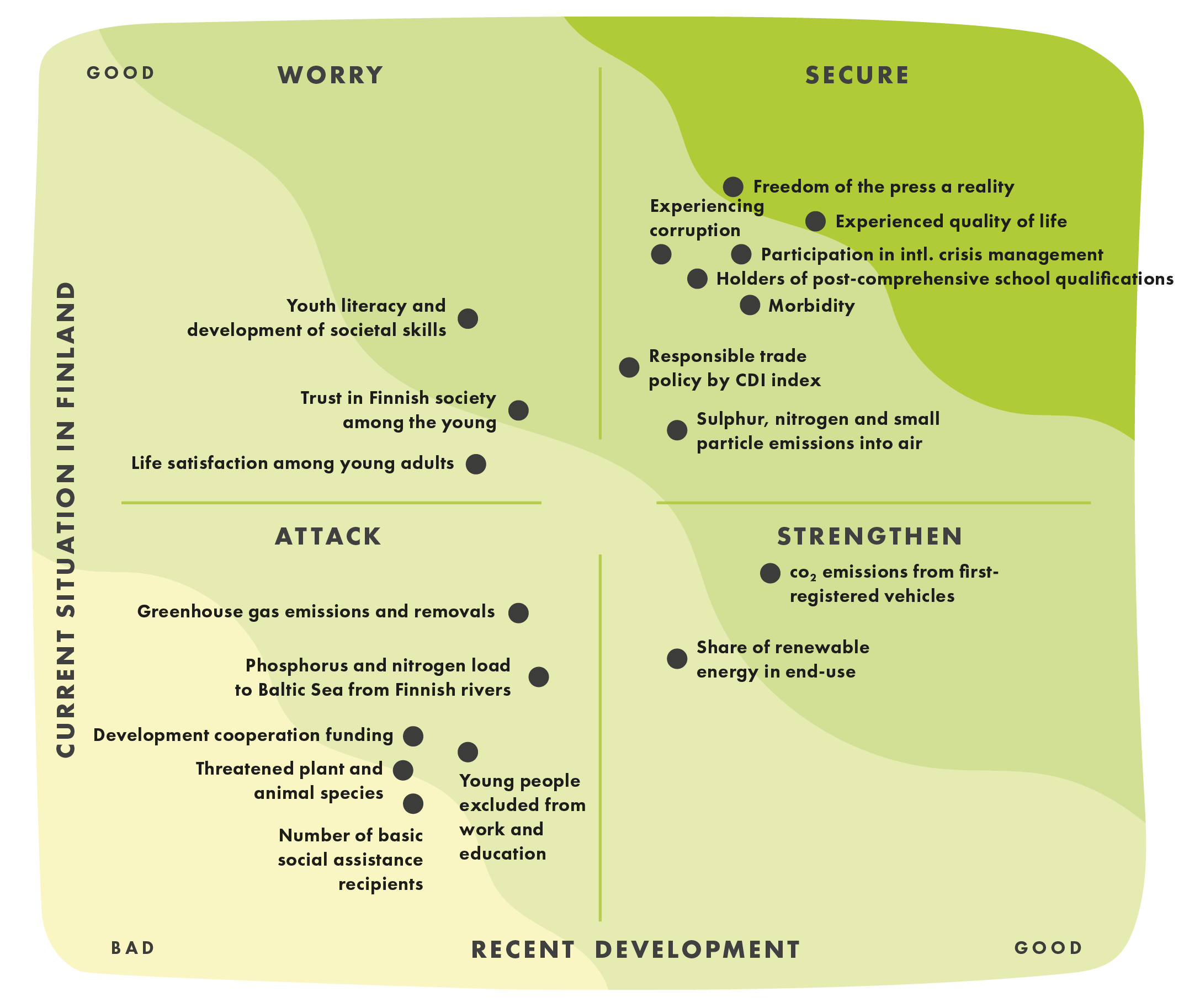 How does the citizens’ panel work?

The citizens’ panel organised in the beginning of 2019 was the first of its kind. Each panel member answered an online questionnaire on the state of sustainable development. The process included an opening event and a closing event where the results were published.

The citizens’ panel will continue as an ongoing process so that the National Commission on Sustainable Development receives information on what the citizens think about the state of sustainable development in Finland. New members may be included in the panel on an annual basis.

The questionnaire was based on the sustainable development indicators managed by the Prime Minister’s Office, expert analyses on these, and citizens’ dialogues. The indicator data has been divided into monitoring baskets designed in cooperation between scientists and experts. Read more about the monitoring baskets on this website at Monitoring. The topics of the monitoring baskets include the state of the natural and other environments, social inequality, and housing and communities.

Why do we need the citizens’ panel?

Scientists and public officials use research data to assess the state of sustainable development, but not whether this is to be considered “good” or “bad”. Citizens’ voice is needed in support of value choices and making decisions. It is important for decision-makers to know about the issues that the citizens wish to see improved.