Government Report on the Implementation of the UN Sustainable Development Agenda: achieving equality and carbon-neutrality in Finland 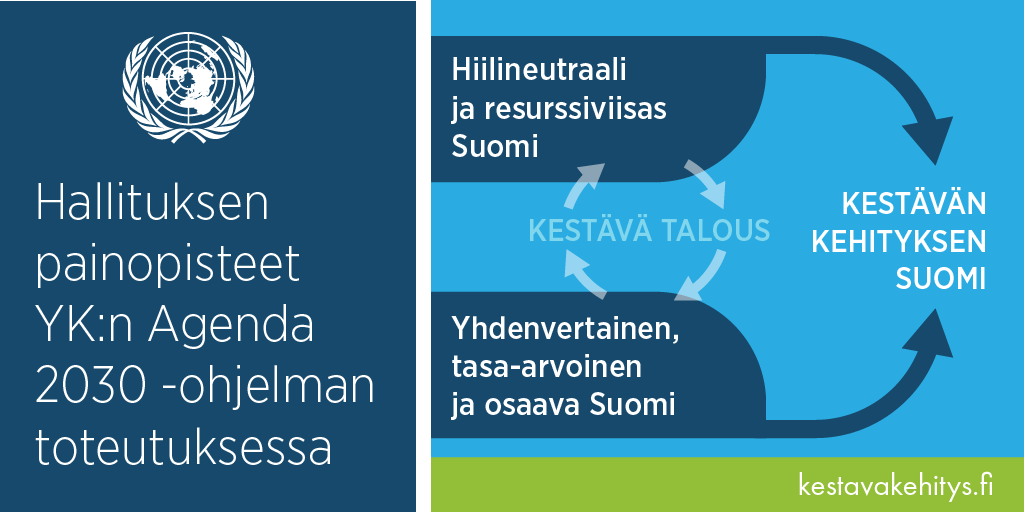 On Thursday 2 February, the Government gave a report to the Parliament on the implementation of the UN 2030 Agenda for Sustainable Development. The aim is a carbon-neutral, resource-wise and competent Finland where non-discrimination and equality is secured.

The Agenda 2030 is a global action programme which obliges and guides Finland and other countries to promote sustainable development on a long-term basis. The aim is to turn the global development into a path where human welfare and human rights, economic prosperity and stable societies can be secured in an environmentally sustainable manner. Extreme poverty is to be eradicated.

In line with the Government priorities, the implementation of Agenda 2030 in Finland builds on two themes. To achieve a carbon-neutral and resource-wise, Finland the focus should be on improving the energy, resource and material efficiency and sustainably increase the share of renewable forms of energy. Finland must produce environmentally-friendly services and innovations, promote their exports, and develop low-emission economic sectors and transport models.

To secure non-discrimination, equality and a high level of competence in Finland, we must prevent youth and long-term unemployment, exclusion of various population groups, polarisation of labour markets, and segregation of living and residential areas. We must also reduce health disparities, promote gender equality, support lifelong learning, and raise the level of education and competence of the population. Non-discrimination includes equal access to services at the different stages of ageing.

A key tool in the implementation of the action programme is the Society’s Commitment to Sustainable Development launched in 2013. The key idea is that companies, corporations, educational institutions, administration, political parties, cities and other actors can make their own concrete commitments to measures that will contribute to the implementation of the shared goals. The more than 400 commitments made so far may be considered as the plan to promote sustainable development of the whole Finnish society.

The plan is intended to sustain over time. The main themes and policy principles - long term action, consistency and involvement - and the monitoring and evaluation systems have been established until 2030. Instead, the measures selected for each government term may vary.