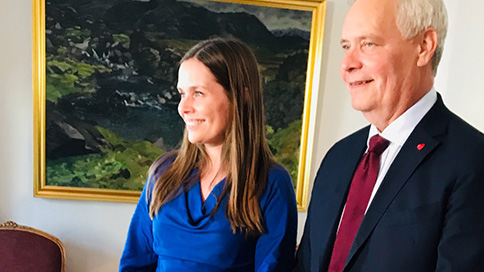 On the agenda in the discussions of the two Prime Ministers was cooperation between Finland and Iceland in the Arctic Council, where Iceland now holds the Chairmanship. The topics also included Nordic leadership in combatting climate change, which is one of the main themes of the Prime Ministers’ informal summer meeting.

Prime Minister Rinne told his colleague about Finland’s current Presidency of the Council of the EU. The two Prime Ministers exchanged views about Brexit, as Iceland also has to prepare for its impacts, and discussed transatlantic relations and security issues.
“The Nordic countries must join forces to strengthen the multilateral system and also take the message of what it means to the United States, a key partner for all of us,” Prime Minister Rinne said. “In the even more critical global political situation the kind of society we have in the Nordic countries is an important strength.”

On Tuesday 20 August, the programme continues with the traditional informal summer meeting of the Nordic Prime Ministers, this year also attended by Federal Chancellor of Germany Angela Merkel.