The development of employment and the productivity of work has taken a positive turn after a long recession. The employment rate is already close to the level preceding the most recent economic crisis. The share of low-income workers has been decreasing in recent years and is currently at lower level than ever in the 1990s and 2000s. By contrast, the share of underemployed has been clearly increasing. There are no major changes in the numbers of employees who find their work emotionally or physically draining.

While employees’ possibilities for influencing their work have remained somewhat unchanged, an increasing number of employees feel able to learn new things in their work. The gender pay gap has only shrunk by four percentage points in the previous 20 years. Large and medium-sized enterprises take global responsibility into account in their activities better than previously.

Indicators selected by a network of experts

Working life, quality and change
Employment, productivity and corporate responsibility are improving, but mental and physical work load remain at the same level 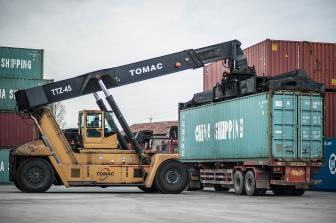 The sustainability of working life and work can be examined from the viewpoints of the environment and the economy and from a social and a human perspective. Working life and work are on a sustainable basis when all these dimensions have been taken into account. Nature sets the limits for economic growth. Economic sustainability, in turn, ensures the availability of the welfare services and a good working life. This also works in the opposite direction: working conditions that support health, wellbeing and innovations also contribute to the success of the workplace. Social sustainability means that workers' rights, sufficient income and equality are ensured.

The economic, social and environmental impacts of business have an important role in the implementation of the sustainable development goals. Efficient use of resources or innovations in the circular economy and renewable and clean energy are examples of that. In the global economy, Finnish companies are responsible for the sustainability of their activities also outside Finland. For example, this means that they respect human rights, prevent child labour and forced labour, and make responsible procurement.

Participation in working life and securing an income are essential from the human and social points of view. The objectives are a high employment rate, productive work and sufficient income. For working life to be sustainable, work must not risk the workers' health. The opportunity to develop one's competence and participate in the organisation of work increases wellbeing, motivates and enhances the creation of new products and services.

Employment and productivity are improving, but the the share of underemployed persons in the workforce is increasing 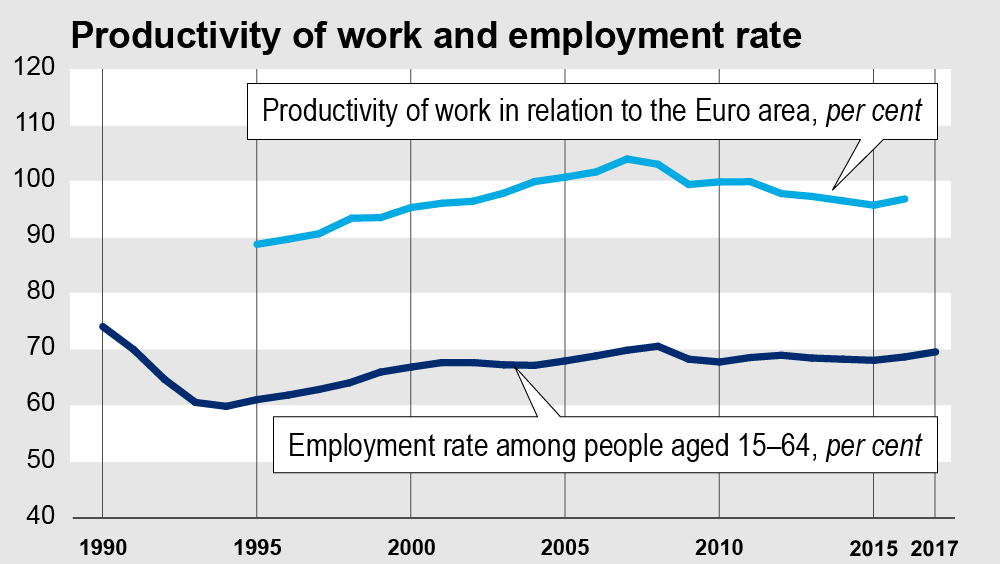 In addition to the employment rate and productivity of work, underemployment and the share of low-income workers are monitored. Underemployed is someone who is working but would like to work more than he or she currently does. A low-income worker is one whose householworkd’s disposable income (excluding sales profits) per consumption unit is less than 60 per cent of the median income of the whole population. In 2016, the limit for being considered a low-income earner was EUR 14,430 per year, or EUR 1,200 per month, in a household of one person. The limit for a household of two adults and one child was EUR 25,970 per year. 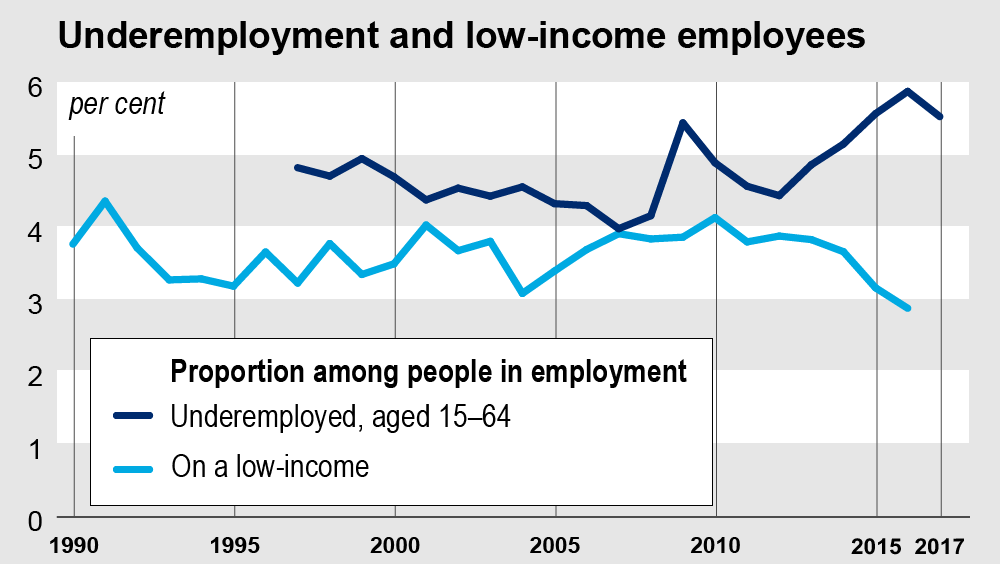 The proportion of low-income workers has been decreasing in recent years and is currently lower than it ever was in the 1990s and 2000s. The proportion varied between 2.9 and 4.4 per cent during the period considered (1990–2016), which is very low in international comparison. In 2016, the total number of low-income workers was about 7,000, and 55 per cent of them were self-employed. The risk of low income was clearly higher among self-employed than among employees. The low-income rates men and women were close to each other. 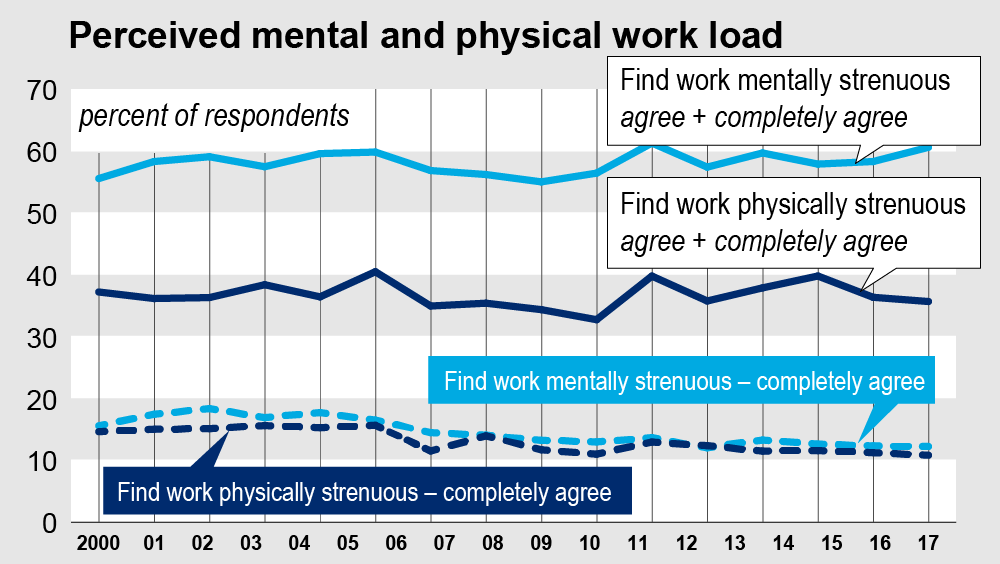 The work load, both mental and physical, has remained surprisingly stable in studies conducted on how employees perceive their situation. Slightly over one third of employees find their work physically strenuous and about 60 per cent find it mentally strenuous. Over the monitoring period of more than 15 years, the only clearly visible change is that slightly fewer employees now completely agree that the work is heavy physically and mentally. Men and women perceive their work load more or less the same.

A lack of autonomy at work contributes to work-related stress. During the 21st century, the opportunities to influence one's work tasks, pace of work and the division of work have remained the same although, for example, the educational level of employees' has risen. Men are able to influence their work more than women. In international comparison, autonomy at work is at a fairly high level, but the trend has not been rising in the 21st century. According to Statistics Finland's Quality of Work Life Survey, the opportunities to influence one's work tasks and the division of work increased between 1984 and 1997, but the trends have since then stabilised. The opportunities to influence the rate of work have not increased even in the long term. 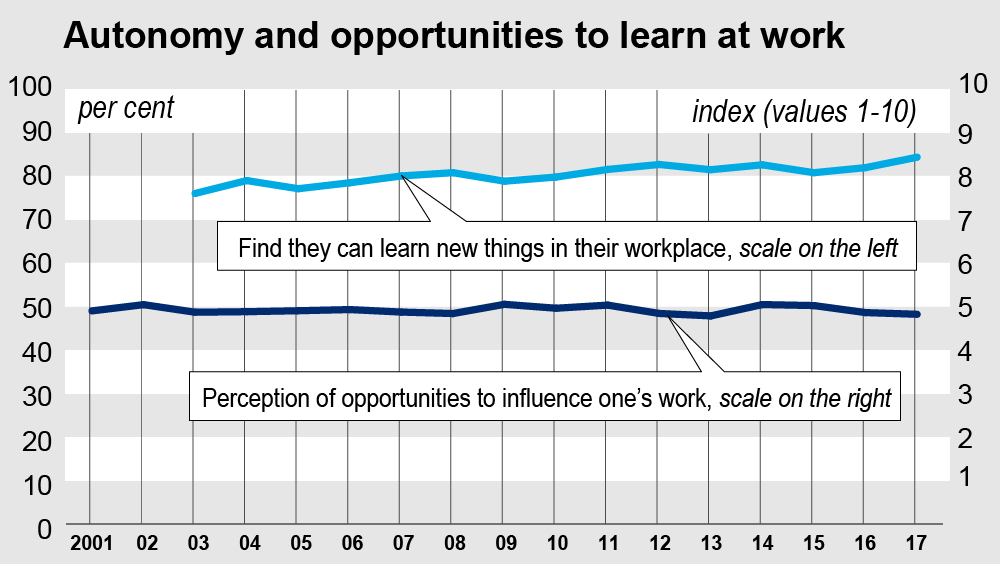 The trend in competence development is towards multi-faceted learning. At the same time, participation in organised training is declining. According to Statistics Finland's Continuing Vocational Training Survey, studying, alongside work, self-directed study and studying remotely and online have become more common. The Working Life Barometer reveals that an increasing number of both men and women are able to learn in their workplace. In 2017, 85 per cent of employees felt that they could constantly learning in their workplace.

The need for competence development related to the changes in working life and technology is not visible in the participation in organised education and training by the adult population, as participation in it has decreased in the past few years. People mostly seek education and training for occupational reasons. According to Statistics Finland's Adult Education Survey, in 2017, 48 per cent of the workforce participated in education or training related to work or their occupation. The majority of this was training supported by the employer, i.e. personnel training, in which 53 per cent of employees participated. The results of the Working Life Barometer are similar: about half of the respondents reported they had participated in paid training during the year. When the number of days used for training is considered, there is a declining trend in training offered by employers. According to the Working Life Barometer, employees participated in training on average for about 4.2 days in 2017, when the duration was 5.9 days in 2001.

A significant part of the difference in salaries is explained by the fact that men and women mainly work in different fields, occupations and positions. There are also more men in supervisory and managerial positions than women. 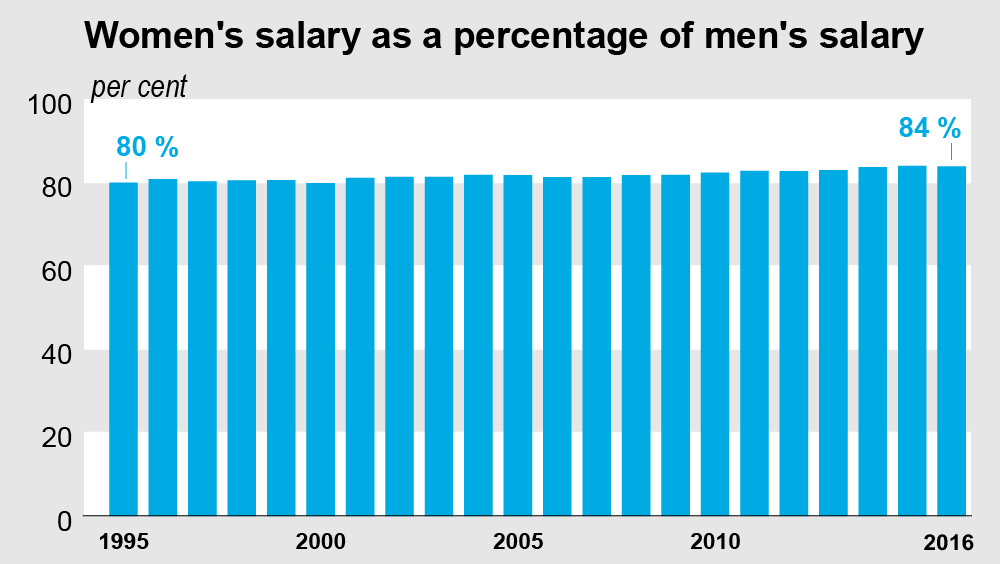 The rise in women's educational level has not had the expected effect on women's position in the labour market and has not narrowed the average pay gap between the sexes. Women and men attend studies in different fields of education, but even men and women who have graduated from the same field of education often work in different sectors and in different positions. Furthermore, women do the majority of care work in families in different stages of life and are therefore absent from working life more frequently than men. The uneven division of care responsibilities and absences from working life affect women's career development and contribute to pay differences.

When monitoring how Finnish companies carry out the implementation of the sustainable development goals globally, corporate responsibility practices can be used as indicators. 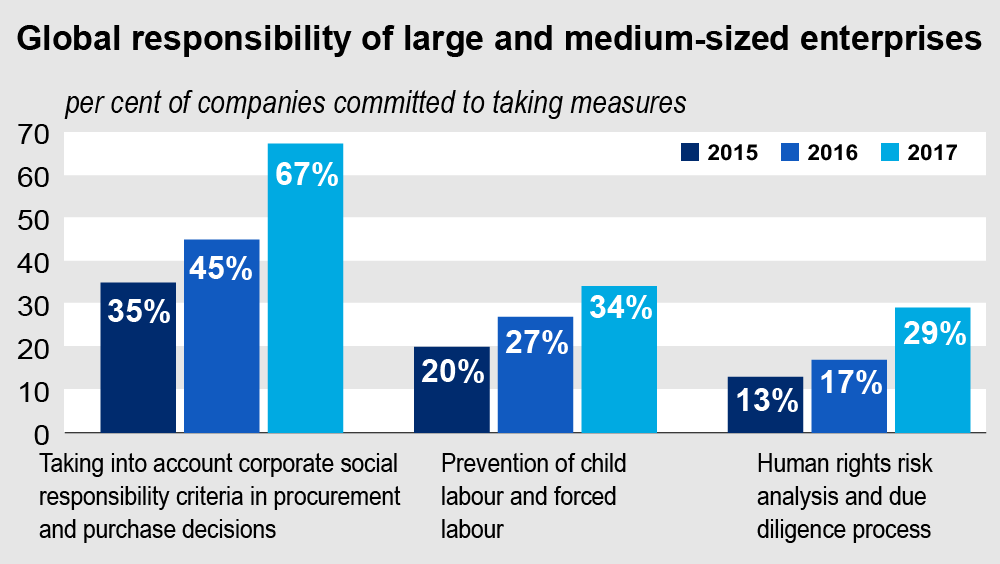 According to the survey carried out by the corporate responsibility organisation FIBS, responsible practices have become more common in large companies in the past few years. In 2017, two out of three large or medium-sized enterprises took into account some corporate social responsibility criteria in their procurement and purchase decisions. Just over one third of companies paid attention to the prevention of child labour and forced labour in their production chains and almost one third reported they performed a human rights risk analysis and due diligence process. Due diligence involves a continuous process that companies use to identify, assess and deal with any harmful impacts on human rights as detailed in the UN Guiding Principles on Business and Human Rights (2011).

The figures are based on a survey in which 200 randomly sampled company directors from among the one thousand largest companies in Finland were interviewed. When interpreting the results it is noteworthy that the operating environments of the companies in the survey varied significantly. For example, the human rights situation varies in different countries. Furthermore, only large and medium-sized enterprises participated.