The objectives of a resource-wise economy and carbon-neutral society are founded on the growth in global consumption and the pressure this causes to the carrying capacity of our planet. Production and consumption must be cleaner and more responsible, as well as more efficient.

In line with the Society’s Commitment to Sustainable Development, our aim is a carbon-neutral society. Key means to reach the objectives include higher energy efficiency, increasing the share of renewable forms of energy in a sustainable way, production and export of climate-friendly products and services, and development of the low-emission sectors of the economy. To promote a resource-wise economy we will increase resource and material efficiency, a circular economy, business models that multiply the productivity of natural resources, investments and experiments in all sectors. 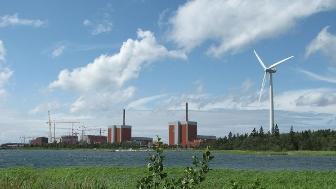 The resource wisdom of the Finnish economy is based on production with specific power as well as energy-efficient solutions. Finland is an energy and material intensive country due to the structure of its production, sparse population, long distances and, in part, cold climate conditions. While the share of services in the economy has increased, services also consume energy and require other production input.

An observation of the annual masses of natural resources reveals that the amount of soil material used for construction is vast. This is also the case in many other EU countries. Forest resources are used primarily in the forest industry and, to some extent, exploited in construction as well as also energy production in connection with by-product flows. When measured in masses, the use of wood continues to remain clearly below the annual growth of timber in Finland's forests.

In 2016, there was a slight upward turn in Finland's greenhouse gas emissions while still being 12.4 million tonnes less than during the year of comparison 1990. This was mainly brought on by an increase in carbon consumption and a decrease in the share of biofuel used in transport. In addition, a growth in the production of the mineral industry and chemical industry slightly increased the emissions. The emissions caused by waste management were somewhat reduced and the emissions of agriculture remained at their previous level.

An increase in emissions and the use of materials is expected in both consumption and investments as a result of economic growth. On the other hand, new technology and methods curbing the amount of emissions are simultaneously introduced. When it comes to renewable energy, Finland continues to be among the top countries in the European Union.

Climate change is one of key global challenges. Finland is committed to global climate change mitigation. Finland's energy and climate policy are based partly on the joint policy measures of the EU and partly on national measures. An image illustrating greenhouse gas emissions and removal presents the emissions resulting from the energy sector, industrial processes and production, agriculture and waste management. Greenhouse gas removal refers to the carbon dioxide fixation from the atmosphere to carbon reservoirs, such as the biomass of plants. Forests provide Finland's most significant carbon sink. 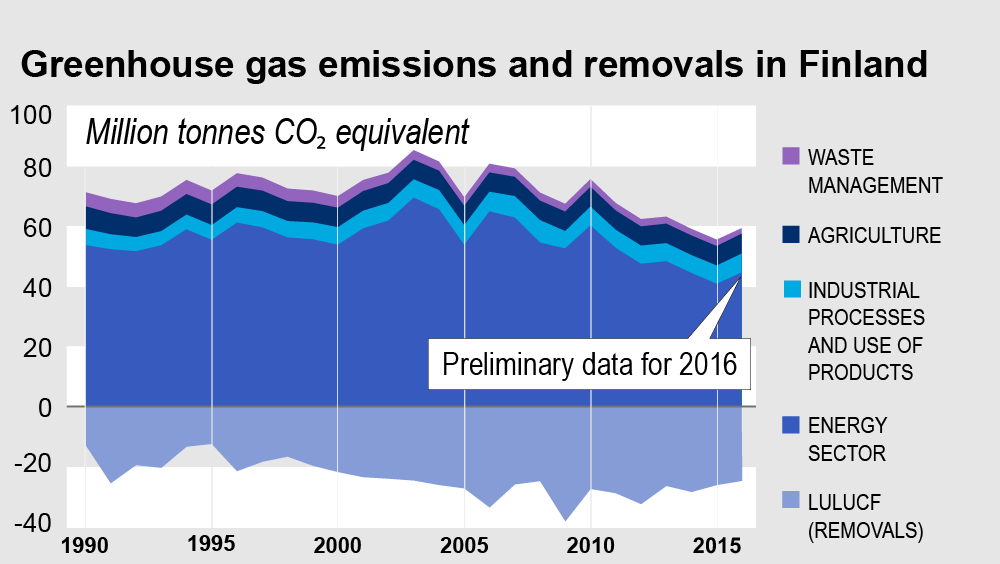 In 2016, the total amount of Finland's greenhouse gas emissions was 58.8 million tonnes in carbon dioxide equivalents (CO² equivalents). Compared to 2015, there was a 6 per cent increase in the emissions, but the total volume was 18 per cent lower than in 1990. The biggest increase concerned traffic-related emissions and the emissions of combined electricity and heat production. In the context of traffic, the increase was caused by the decline in the share of biofuels in the total fuel consumption in traffic. In combined electricity and heat production, the growth in carbon consumption was the cause.

Emissions not included in emission trading grew by 5 per cent in total compared to 2015. In the sector for industrial processes and product use, emissions grew by 4 per cent since the previous year. The increase was mainly caused by the emissions of the mineral industry (13 per cent) and the chemical industry (11 per cent). The emissions from waste management was reduced by around 7 per cent. In 2016, carbon dioxide sequestration, or carbon sink, was 6 per cent lower than in the previous year. The total volume of the sinks was over 20 million tonnes in 2016.

The demand for energy is partly affected by the economic situation and meteorological conditions. At the national level, it is possible to affect traffic, a significant source of greenhouse gas emissions.

Forests are one of Finland's key natural resources. Therefore, a simple balance observation of the growth and removal of standing timber has been selected as one of the used descriptors. Forests are a living natural asset requiring long-term rotation, and wood grows slower in the north than in the south. In addition, carbon dioxide sequestration is dependent on a tree's stage of growing. 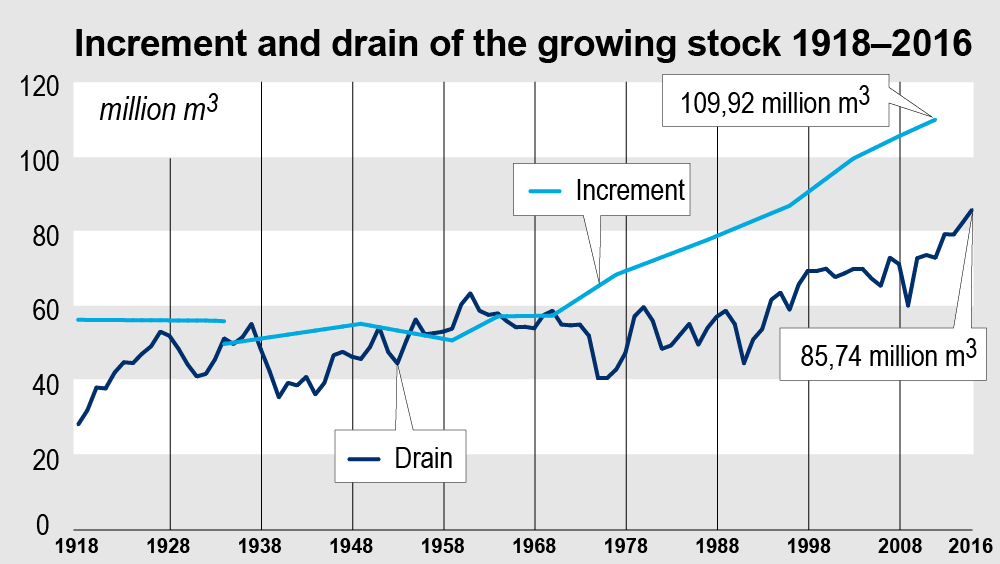 Thanks to active forest management, the total surface area of understocked forests has been strongly reduced compared to the forests of the 1970s. Although the use of Finnish wood has increased, over one fifth of the growth will remain in the forest, therefore increasing the timber stock and carbon sequestration. Most standing timber roughens in North and Eastern Finland.

To ensure that the standing timber will continue growing at the current rate, active and sustainable forest management measures will also be needed in the future. A favourable development of the biodiversity of forest nature requires the conservation and protection of forests. Forests have become increasingly vulnerable to weather and climate risks. In order to ensure the growth of standing timber, efforts must be made to promote the prevention of risks concerning tree damage and diseases as well as growing forests with multiple species.

Renewable energy accounts for 39 per cent of final energy consumption

There is a desire to increase the use of renewable energy, particularly in order to reduce greenhouse gas emissions. The use of renewable sources of energy also promotes the consumption of domestic energy and therefore improves and maintains the security of supply in the energy sector.

Increasing the share of renewable energy and cutting the share of fossil energy sources has been Finland's goal for a long time by now. Renewable sources of energy used in Finland include hydro and wind power, solar energy, geothermal heat, biogas, recycling and waste-derived fuels, wood-based fuels as well as other plant and animal-based fuels. The energy consumption in Finland is affected by the cold climate, long distances and the fairly energy intensive industry in the country. 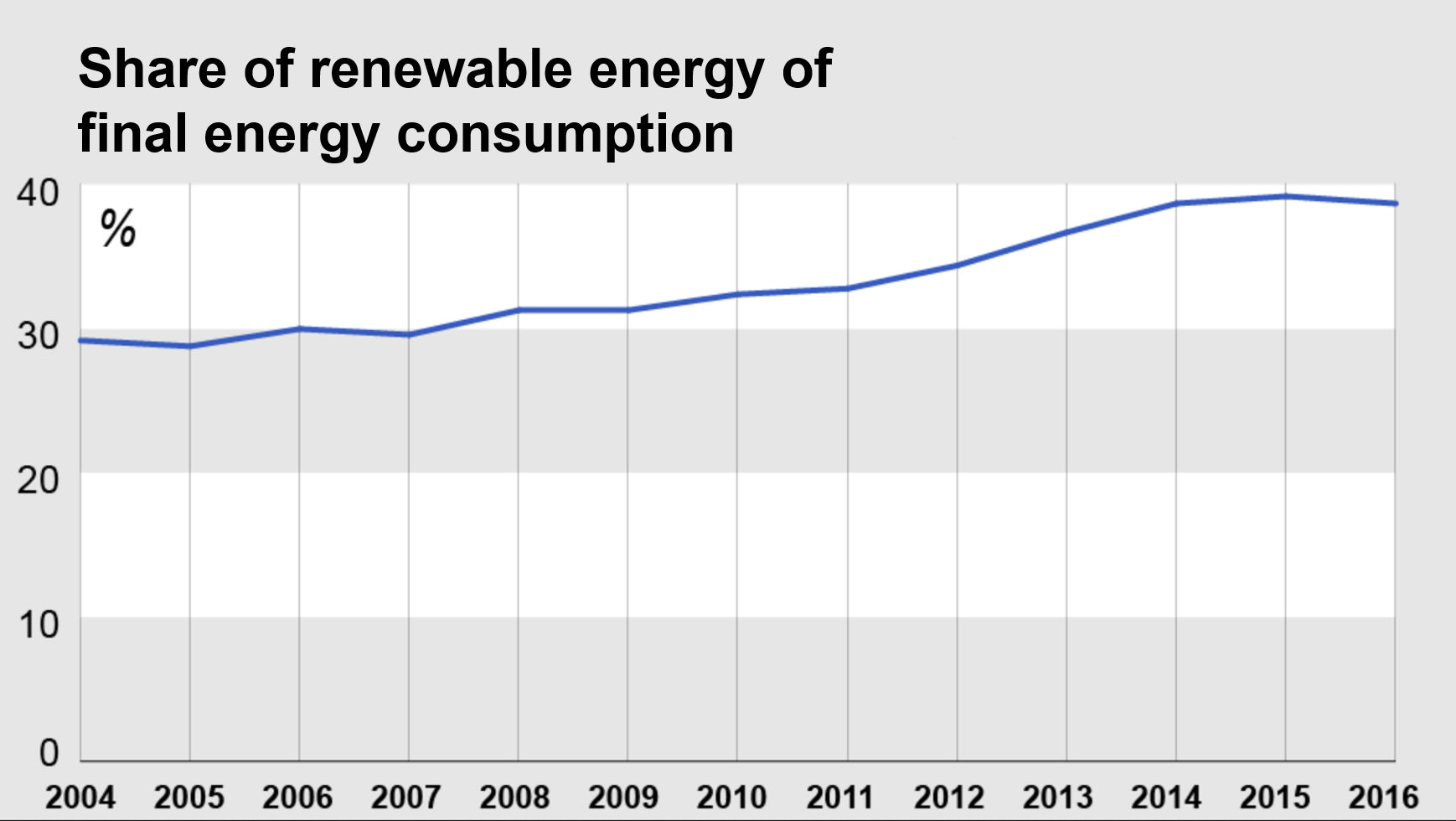 The growth in the share of energy produced by renewable energy sources out of the final energy consumption describes a transition from the fossil economy towards sustainable energy production. 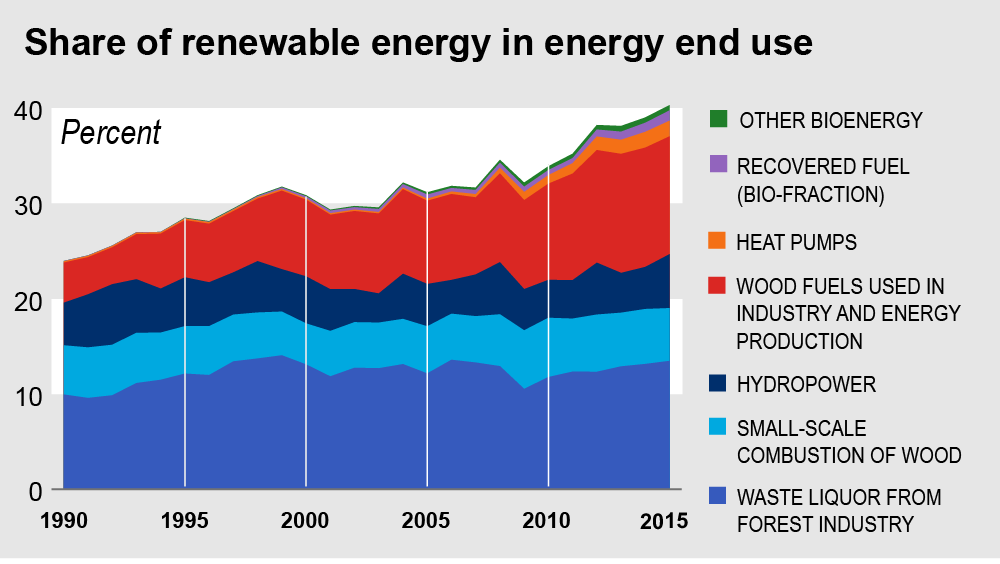 Around 4/5 of Finland's renewable energy is based on the by-product flows of the forest industry and forest management. New investments in the forest industry also increase the provision of by-products and forest chips used as energy sources. Hydro power contributes to slightly over 10 per cent of all renewable energy. There has been an increase in the consumption of energy produced by wind power and heat pumps, and transport biofuels in recent years. National measures for reducing traffic emissions are important as traffic is the biggest emission sector outside emission trading.

According to an estimate by the national Energy and Climate Strategy (VNS 7/2016 vp), which has set its sight on the year 2030, renewable energy will contribute to 47 per cent of the final energy consumption in 2030 if no new policy measures are introduced. If policy measures are taken in accordance with the strategy, the share will increase to 50 per cent by 2030 in accordance with the national objectives.

According to Statistics Finland, the total expenditure of research and development activities in Finland was EUR 5.9 billion in 2016 (2.8% of the GDP). Investments by the private sector comprised the majority of these costs. No reliable statistics are available on the public investments on new business, research on resource efficiency and carbon neutrality or innovations.

Due to this absence of overall statistics, the investments by the public sector on innovation funding is observed in this context through the funds granted by the Finnish Funding Agency for Technology and Innovation (Tekes) for resource-wise innovations. Funds provided by Tekes for resource-efficient and carbon-neutral solutions (incl. energy and environmental projects) help companies in Finland develop related business activity and grow in the export market. The graph illustrates the funding granted by Tekes for resource-wise innovations. Their share of the innovation funding by Tekes has varied from 45% to 52% during the period under consideration. 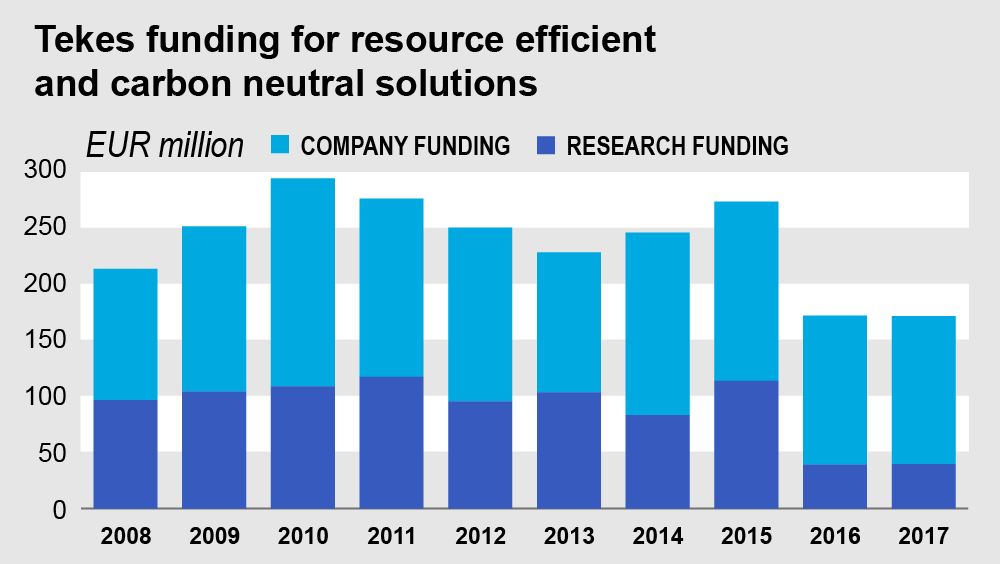 In 2016, the total funding amounted to around EUR 172 million. Compared to 2015, the funding authorisations were reduced by one fourth to EUR 140 million. In connection with the government's key projects, Tekes was provided with the additional authorisations of EU 16 million for the development of new bioeconomy products and services and the promotion of cleantech solutions in small and medium sized enterprises. The beginnings and conclusions of major national innovation programmes are visible in the annual variation of the allocation of funding. In 2017, the funds provided by Tekes for resource-efficient and carbon-neutral solutions remained at the level of the previous year.

In the future, the development of resource-efficient and carbon-neutral solutions will continue to be key to a systemic change, also providing solution possibilities for global challenges. In recent years, the focus has been shifted to developing cooperation between different parties, construction of networks promoting productivity, and forming new, strong ecosystems.

At the beginning of 2018, Tekes and Finpro merged into Business Finland. The provision of funds to innovations will continue under the new organisation. In the coming years, the focus of the programmes of Business Finland will be on the development of resource-efficient and carbon-neutral solutions. 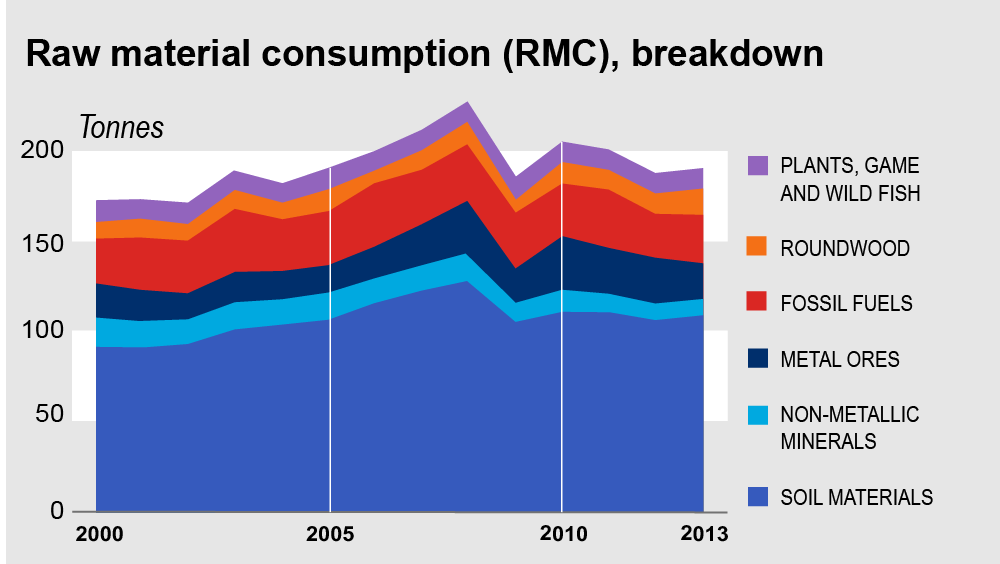 The largest mass-based use category comprises different soil material of which around 100 million tonnes is exploited annually for purposes such as road construction and other needs pertaining to the infrastructure and construction. Construction is also a significant application in other EU countries.

This interpretation text was prepared by Erja Fagerlund at the Ministry of Economic Affairs and Employment in cooperation with the Ministry of Agriculture and Forestry and the Ministry of the Environment. Available documents were utilised in the process.