Inequality is a global problem and a challenge in Finland as well. Growing inequality is a particular challenge to socially sustainable development, but it also impacts other dimensions of sustainability.

Equality is manifested in many ways in the society: income disparities, health, social exclusion, wellbeing and life satisfaction experiences, education, and faith in the future. The factors behind inequality may be an outcome of long-term trends or caused by unexpected, sudden events. The dimensions of inequality are also closely linked to each other and impact on matters such as peace in society, as well as human wellbeing, economy and employment.

Social inequality
No significant change in income differences, the number of recipients of social assistance is highest in Uusimaa 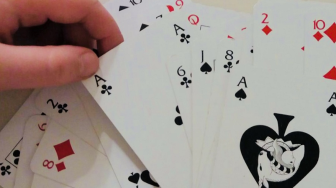 The indicators suggest that the sharp increase in income differences and growth in the share of persons living on low incomes has come to a halt and, in certain areas, begun to reverse itself. On the other hand, the differences continue to be big compared to the early 1990s.

The dramatic growth in the number of persons living on social assistance can be considered a particularly worrying sign. This is also connected to the numbers of families with children on social assistance as well as mechanisms linked to an intergenerational cycle of deprivation, which play roles in predicting future trends in inequality.

The number of young adults satisfied with their lives has also decreased in recent years. Satisfaction with life is connected to the experiences of wellbeing among young adults and strongly linked to their faith in the future as well as the opportunities provided by society. These are reflected in the development of social inequality despite the fact that the majority of young adults appear to continue to be satisfied with their lives.

As a result of the growth of inequality, many international organisations, including the OECD and the World Bank, have called for governments to make efforts to bridge the gaps in income differences between the rich and the poor. There are many reasons behind this development, including the fact that both affluence and deprivation tend to accumulate. Low incomes, health risks and lower life expectancy are particularly likely to accumulate. The accumulation of deprivation is also repeated, i.e., transferred from one generation to the next, and is apparent as lower education levels and fewer opportunities for children. The correlation between the incomes of parents and their children is stronger in countries with major income differences compared to more equal countries: it is more difficult for those from poor backgrounds to get ahead in life.

Equal conditions guarantee equal opportunities for younger generations to prosper and allows a better utilisation of their skills and potential. Social legitimacy, or support base, is another factor relevant to sustainable development. In countries with more inequality, social institutions are considered less reliable than in more equal countries. Extreme examples of this can be found in certain highly unequal countries in South America and Africa where social harmony has been disturbed.

A further approach for measuring inequality in the distribution of incomes involves calculating the low-income, i.e. poverty rate, where applying a limit of 60% of the country's average (median) income has become an established practice. Everyone below this line will be considered a low-income earner. Changes occurring at the opposite ends of the income distribution scale are measured in terms of the relation between the highest and lowest 10% or the development of the real incomes of the different deciles of earners. The income shares of the highest and lowest 10% used in the present document describe their percentage share of the income of the entire population. The graph indicates the share of total income received by the highest and lowest 10%. 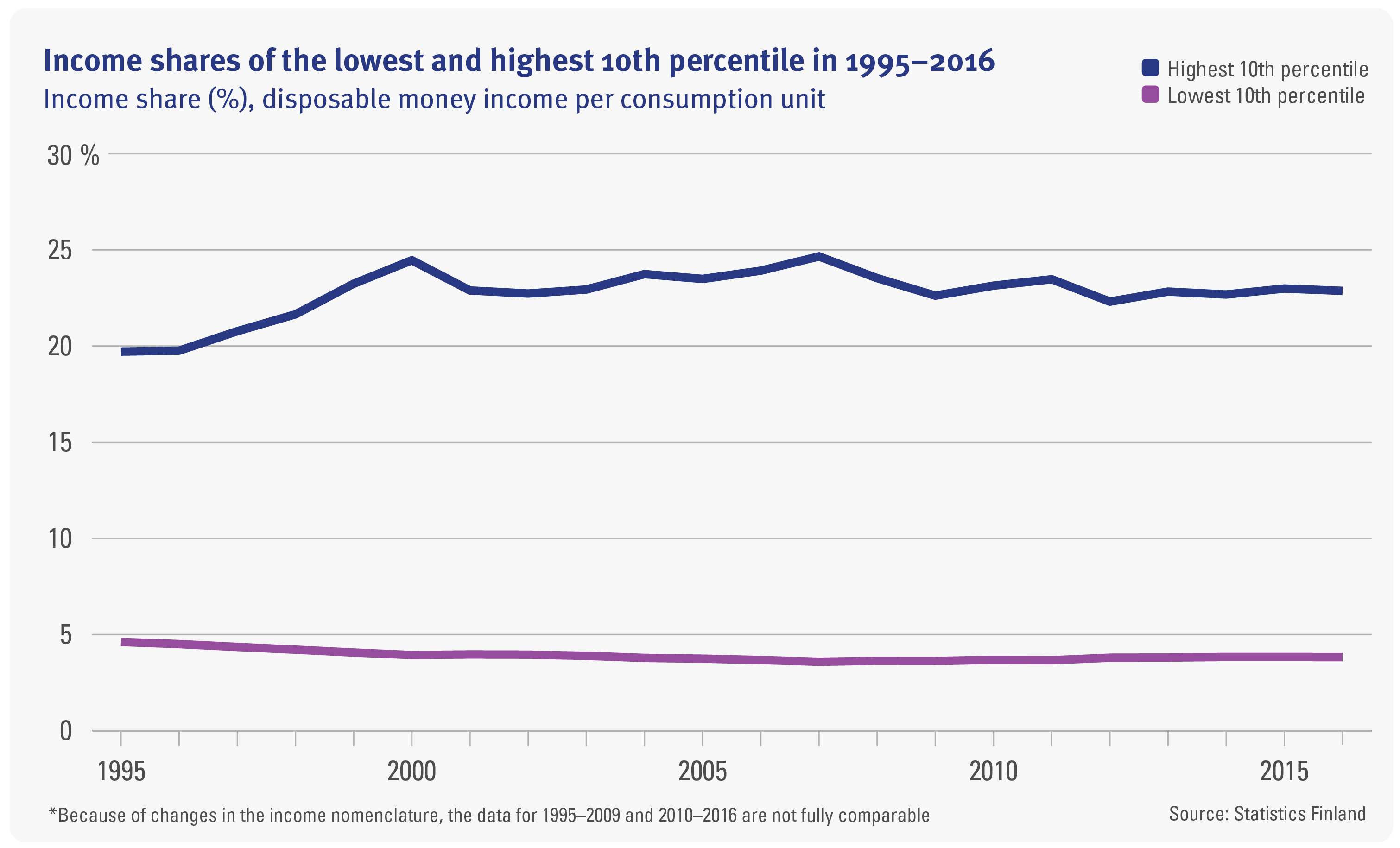 In Finland, the development of income differences and that of the number of low-income earners have been congruent. An economic upturn beginning in the mid-1990s particularly resulted in an escalation in the incomes of the highest 10% and, above all, the highest 1%. Since 2008, the growth in income differences has halted and the low-income rates have taken a slight downward turn. The latest statistic from 2016 indicates a low-income rate of 11.8%. While the rate has increased by 0.1 percentarge points since the previous year, it is still lower than rates for the previous 10 years.

The fact that the economic upturn of the 1990s affected those with high incomes the most underlies this trend. Another factor reinforcing the trend was the separation of capital income and earned income taxation, which provided highly educated people with high incomes with an opportunity to have their income taxed less severely as capital income. Therefore, the redistributive effect of taxation was reduced. 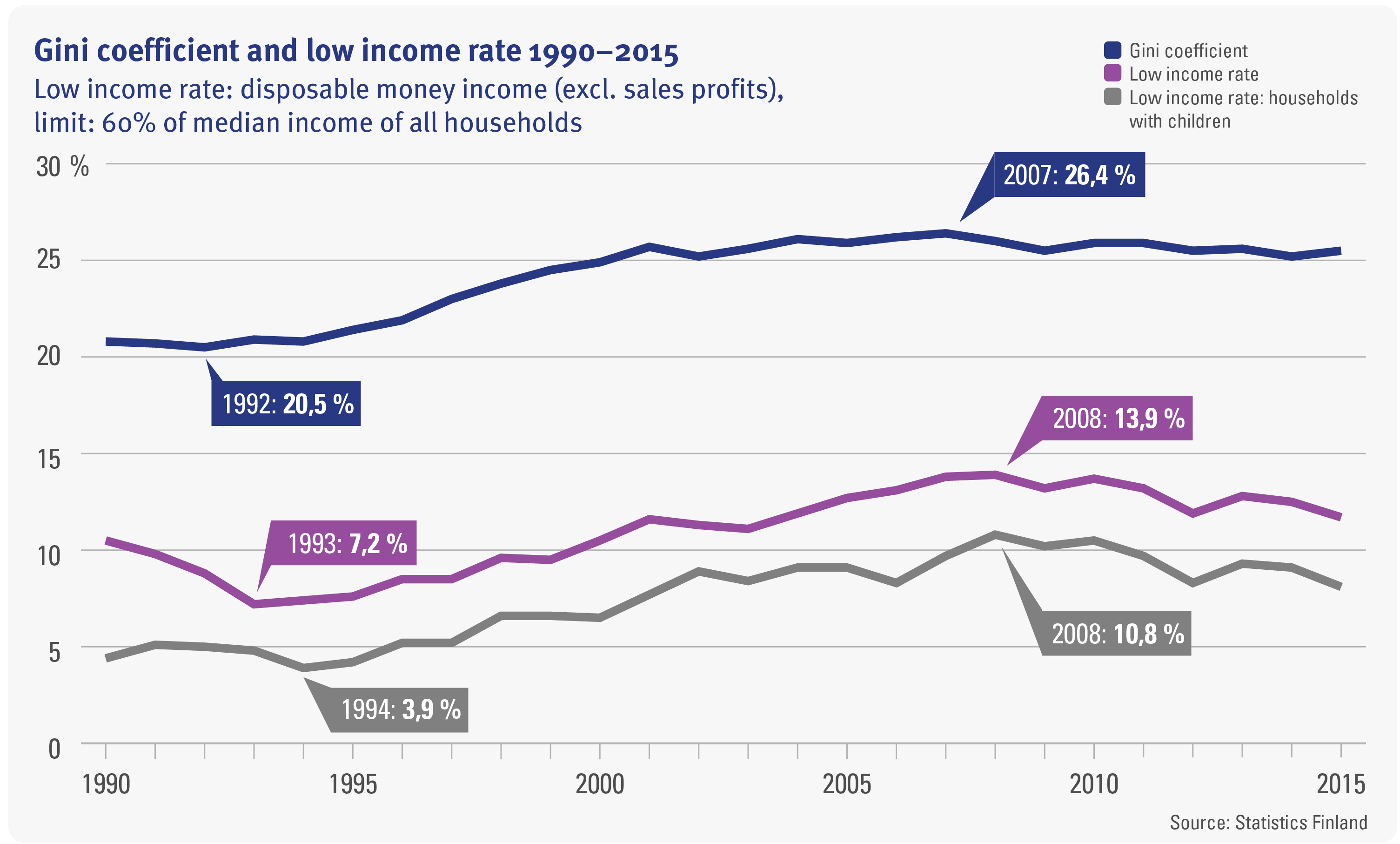 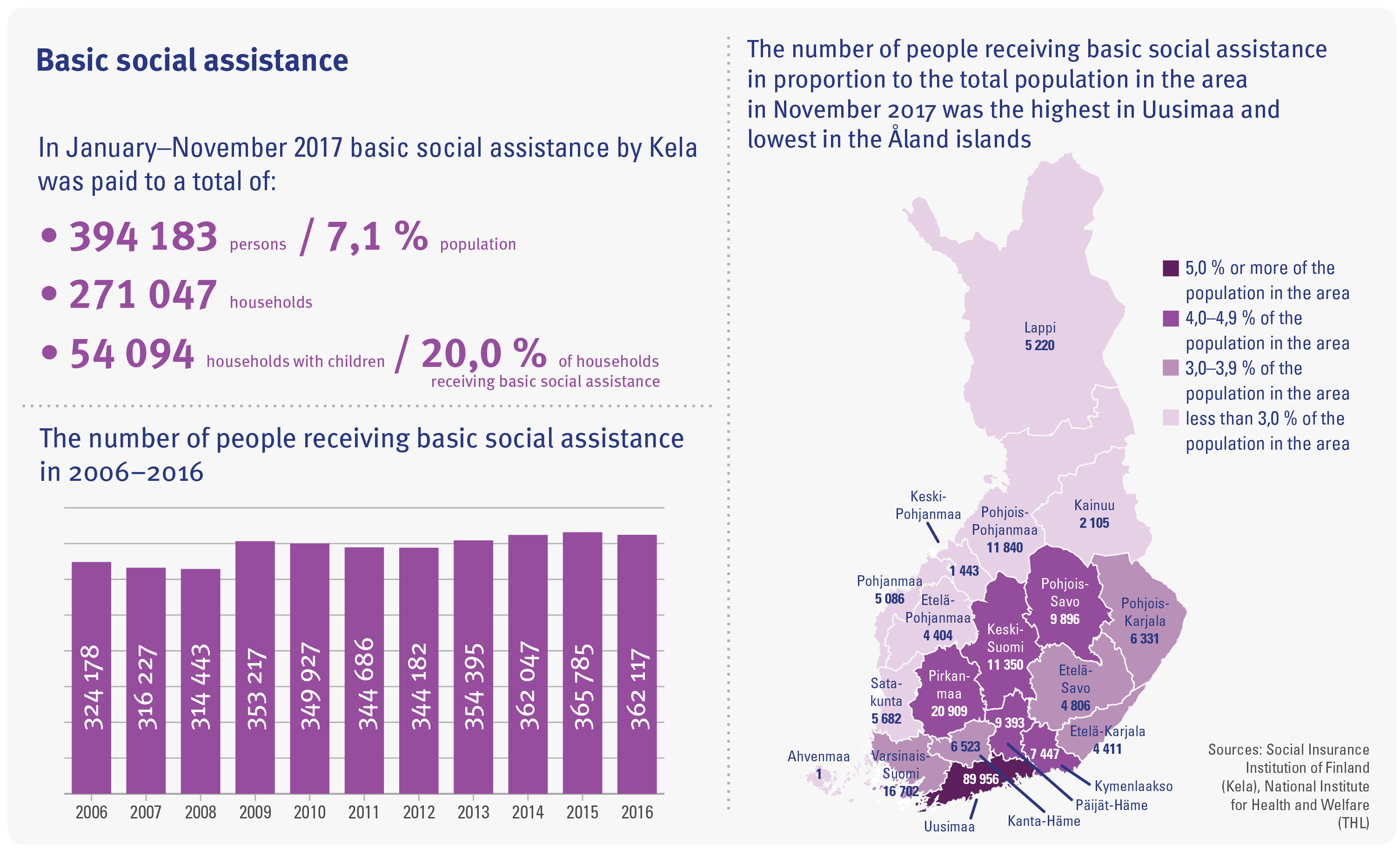 There was a surge in the share of the recipients of basic social assistance during the economic depression of the 1990s. The consecutive economic upturn resulted in a decline in these shares until a further level shift occurred as a result of the economic slump that started in 2008. The transfer of administrative responsibility for the basic social assistance scheme to Kela at the beginning of 2017 increases the number of the recipients of the assistance by over 30,000 persons.

At the regional level, the number of recipients of basic social assistance out of the total population in the area was in October 2017 highest in Uusimaa and lowest in Aland. The second highest share of recipients in relation to the population in the region was located in Päijät-Häme and the third highest in Kymenlaakso. In all of Finland, a total of 394,183 persons, or 7.1% of the population, received basic social assistance in November 2017.

Satisfaction with life has been considered one of the best individual indicators for measuring wellbeing. The satisfaction and happiness of young adults is a reflection of their faith in the future and their belief in the opportunities provided by society. If they are unsatisfied, they will also not have faith in the future and vice versa: if a person has no faith in their future opportunities, he or she will also not be satisfied. 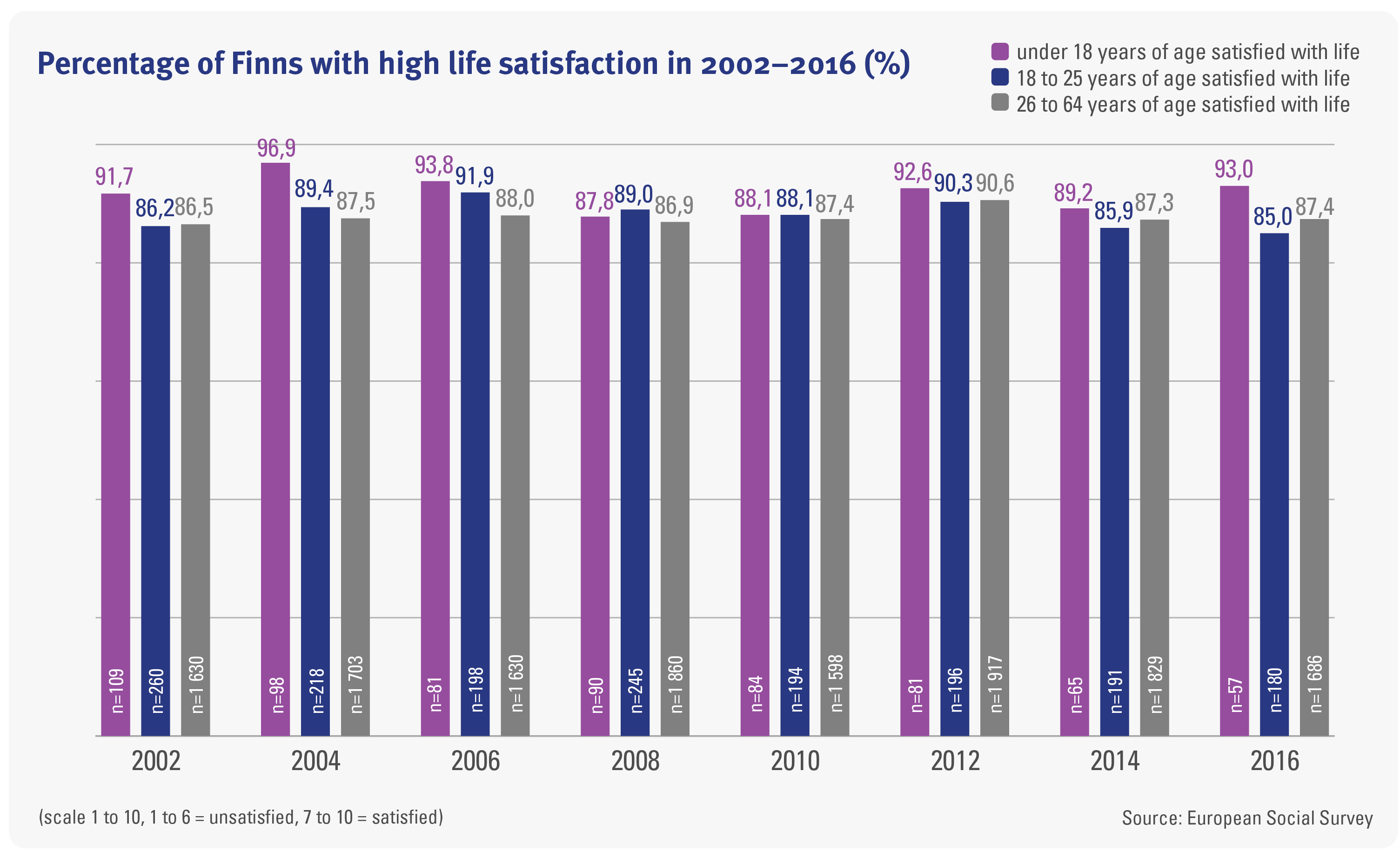 Satisfaction with one's life increased dramatically among young adults in the early 2000s. This positive trend took a downward turn as a result of the economic depression of 2008. While the majority of young adults (85.0%) continue to be satisfied with their lives, the decrease from the level of 2006 (91.9%) is worryingly steep.

One’s outlook on future opportunities creates conditions for experiences of satisfaction. As a result of the economic depression of 2008, unemployment grew rapidly, particularly among young people, resulting in problems with income and a decrease in satisfaction. In turn, cuts in education led to a growing lack of prospects.

Inequality is also linked to the vulnerable position of refugees

Globally, there are 65.3 million people who have been forced to abandon their homes. According to the United Nations High Commissioner for Refugees (UNHCR), the threshold of 60 million refugees was exceeded in 2015. The numbers demonstrate global problems related to sustainable development and illustrate the inequality connected to the vulnerable position of refugees.

People are forced to leave their homes due to both wars and conflicts as well as changes in the living environment. According to predictions by the UN, around 200 million people will be forced to abandon their homes due to reasons such as drought. International agreements have been concluded on the status and reception of refugees; however, the consequences of climate change have been barely taken into account in the current conventions relating to refugees. 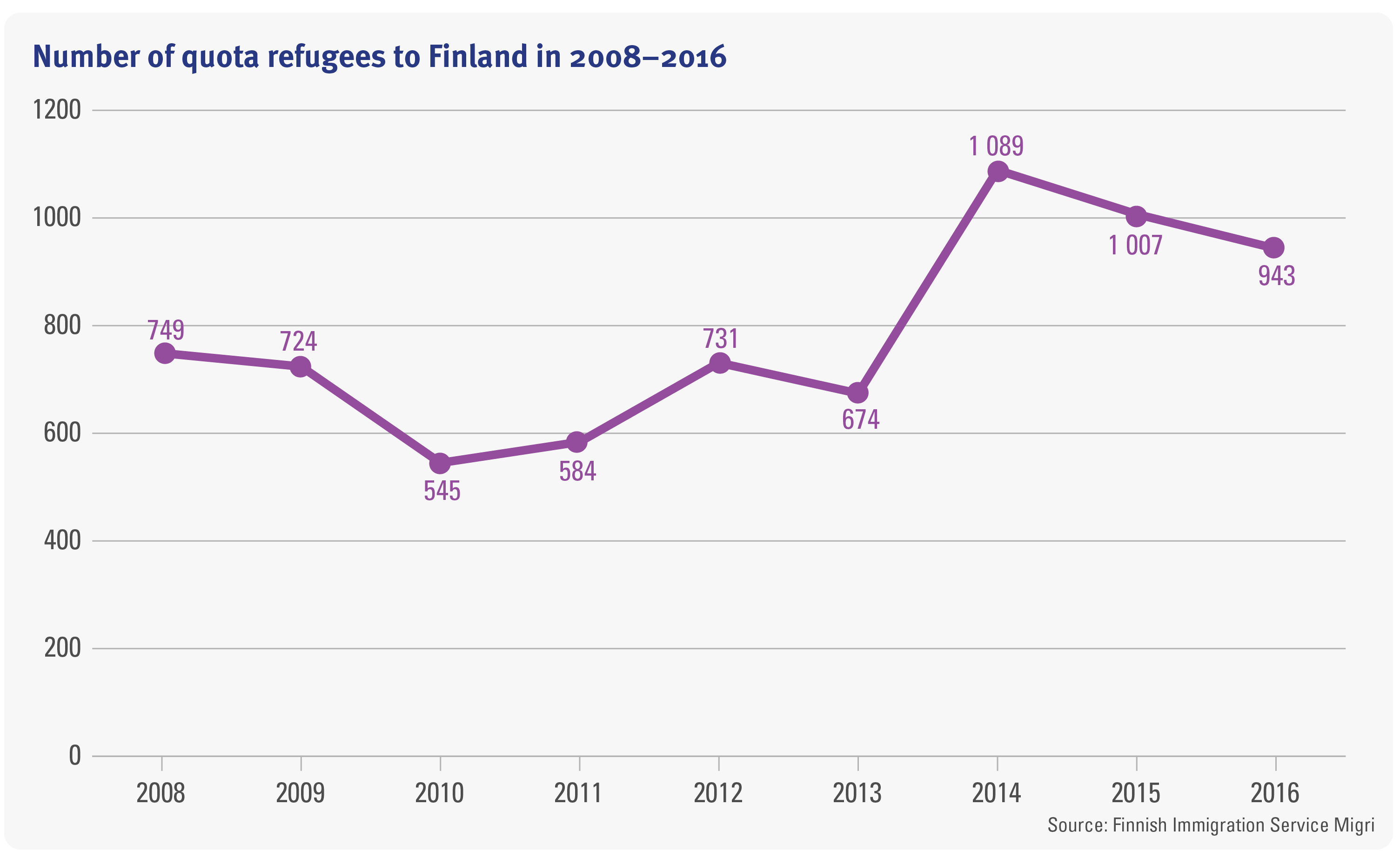 In 2015, the global number of refugees grew by 5.8 million persons. At the same time, only 201,400 persons were able to return to their homelands. The impacts of prolonged global conflicts are also visible in Finland. The numbers of asylum seekers grew in Finland like elsewhere in Europe during 2015.

Also in Finland, this development demonstrates the acute situation of quota refugees and asylum seekers as well as the scale of the phenomenon, and also illustrates the extent of the international solidarity and responsibility which Finland is willing to shoulder. At the moment, the regions neighbouring the countries in crisis bear most of the responsibility. Over 86 per cent of the world's refugees are in developing countries. 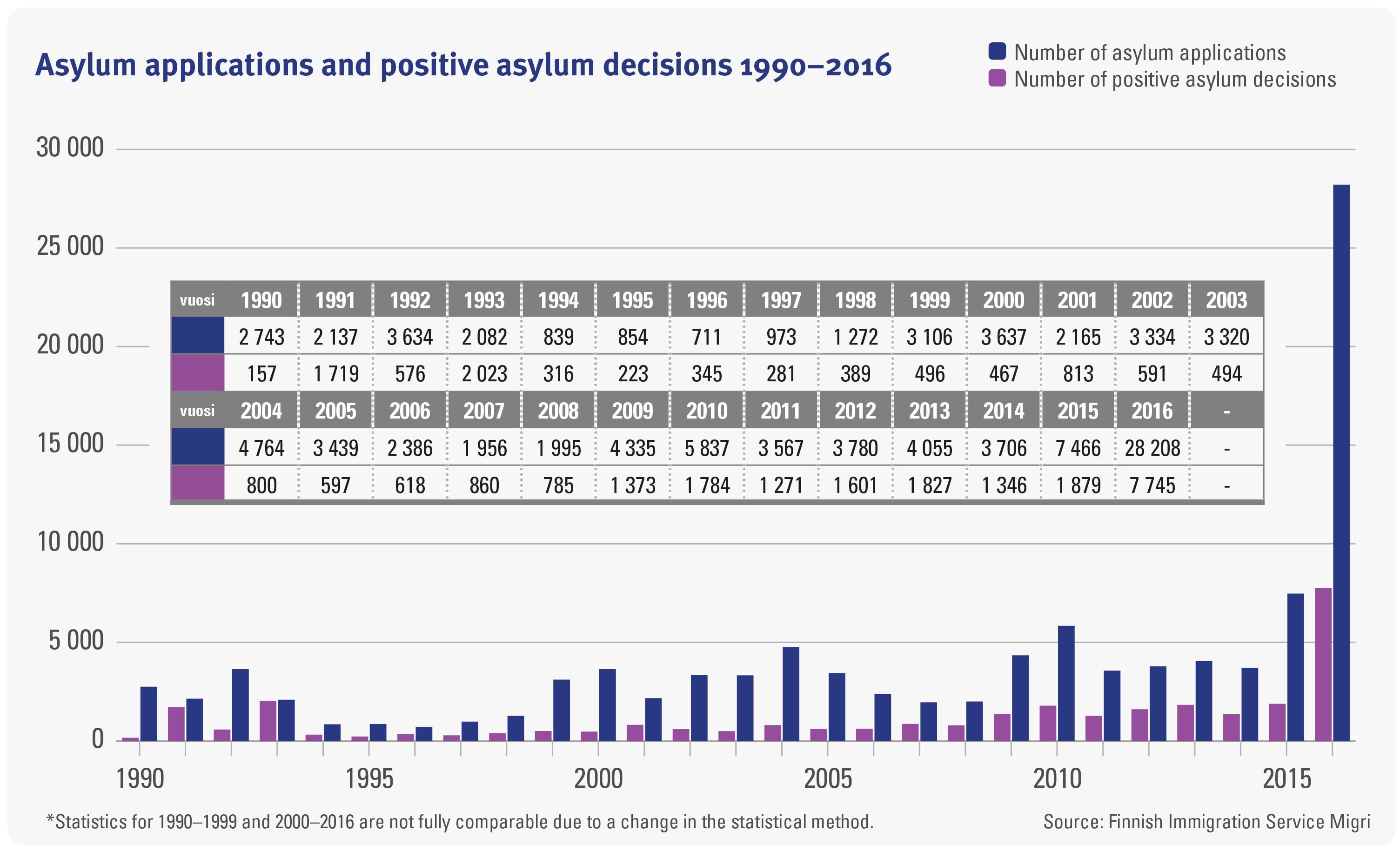 The number of quota refugees arriving in Finland grew considerably during 2013–2014. The rate has since declined but remains far higher than in 2010 and 2011. The numbers of quota refugees are linked to decisions taken by the government of Finland within the framework of international conventions and obligations. They, in turn, are quick to react to changes in the situation of refugees, as the Iraq crisis and the war in Syria indicated in 2015. Since 2001, Finland's quota for refugees has been 750. For 2014 and 2015, the quota was increased to 1,050 due to the Syrian Civil War. In 2016, the quota was brought back to 750.

The numbers of asylum seekers arriving in Finland have increased sharply in recent years, particularly in 2015. Based on the annual statistics on asylum decisions by the Finnish Immigration Service, the majority of the asylum applications received in 2015 were registered for 2016 (in total 28,208 persons).  Asylum was granted to 7,745 persons based on the applications registered for 2016. It must also be noted that the asylum applications and positive decisions from a specific year are not directly comparable as an application registered in one year may still be pending in the following.

Social inequality is a complex challenge of many different dimensions. Due to the broadness of the topic, it is challenging to assess the state of social inequality based on a handful of indicators even though each of the aforementioned indicators tells a part of the story.

In the future, the indicators can be developed, for instance, by tackling the key mechanisms of inequality in further detail or by focusing attention more closely on certain dimensions of social inequality. The interpretation of the indicators can also be expanded and developed further, although it would be ideal to spark discussion on the topic and thus introduce more dimensions to the interpretation.