The objective of the Society’s Commitment to Sustainable Development is to create sustainable and safe communities where there are viable rural and urban areas, less need for transport, and strong community spirit and participation. The aim is to contribute to bringing the global consumption of natural resources on a level that is environmentally sustainable.

Reaching the objectives depends on changes in the technologies as well as adapting the society to a more resource-wise and lower-emission economy. The global ecological footprint of consumers and companies must be reduced. At the same time the export of sustainable Finnish solutions may increase our positive carbon handprint. Consumer choices that conserve natural resources in housing, transport and food must be as easy and profitable as possible. The public sector should serve as a facilitator and example in this. 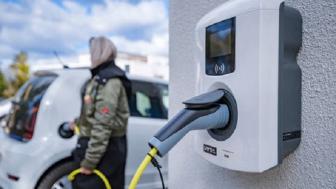 In Finland, public consumption and private consumption are undergoing a transformation. An increasing amount of attention is paid to the environmental impacts of measures and solutions. In addition to personal choices made by organisations and citizens, changes such as those concerning technology and energy systems have reduced the carbon footprint of housing and reversed the growth in emissions caused by passenger car traffic.

In the future, changes in the amount and focus of consumption are important in order for us to reach global objectives for reducing greenhouse gas emissions and promote the circular economy. Finland is aiming for an 80 per cent reduction in greenhouse gas emissions from the level of 1990 by 2050. The carbon footprint of consumption did not increase between 2003 and 2013 even though people have more euros at their disposal. The carbon footprint of housing has reduced while the footprint of food products, other goods and services,mobility and travel have remained unchanged.

The sufficiency of natural resources and environmental impacts also require the introduction of new ways for us to act, own things and organise our daily lives. The goals set for recycling municipal waste will also be stricter. The aim is to promote the circular economy as well as to reduce the amount of waste that ends up in landfills or is incinerated.

Between EUR 30 and 35 billion is spent on public procurement every year. So far, we do not have quantitative follow-up data on the effectiveness of procurement, i.e. how public procurement  support accomplishing strategic goals set for areas such as innovations or sustainability.

In consumption, the carbon footprint of both housing and passenger car traffic have been reduced

Consumption plays a role in the efforts towards increasingly stricter goals for emissions. Finland is aiming for an 80 per cent reduction in greenhouse gas emissions from the level of 1990 by 2050. In the Medium-term Climate Change Policy Plan for 2030, a further foal has been set to reduce the carbon footprint of consumption by an average of 50% by the year 2030. 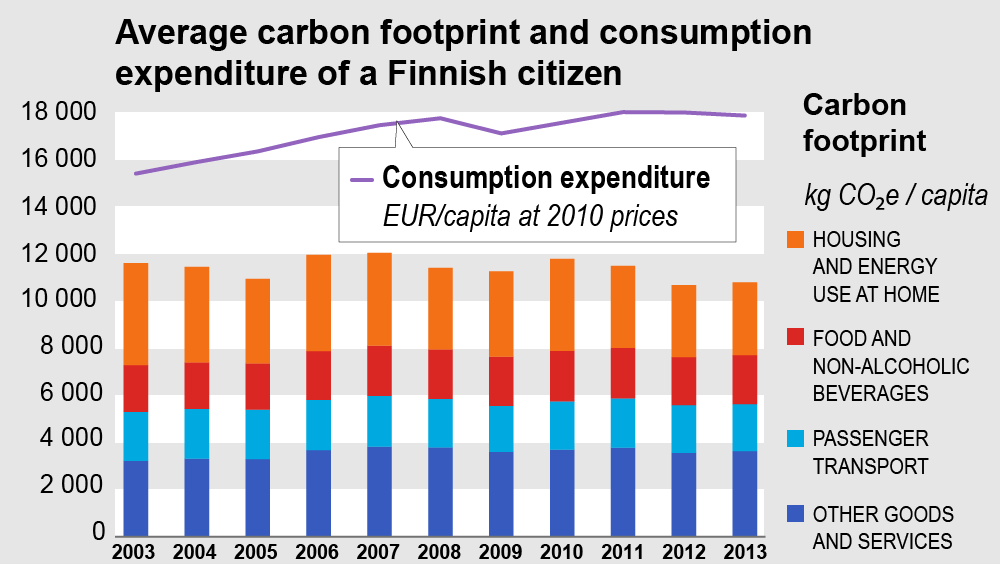 Between 2003 and 2013, the average carbon footprint of Finns per person and per year varied from around 10.5 tonnes to slightly under 12 tonnes. Housing, mobility and food form the majority of the pressure caused by consumption. In recent years, the carbon footprint of both housing and passenger car transport has been reduced while the footprint of food products has remained unchanged. Greenhouse gas emissions caused by private household consumption account for about 70% of Finland's consumption-based greenhouse gas emissions.

Redirecting consumption to low-emission products and services will reduce the pressure. New technologies and services also transform consumption and the market. However, people are not always rational, and more environmentally friendly products may not succeed in the market. However, it is possible to affect consumption with policy instruments such as the pricing of energy and fuel, regulations concerning construction and renovation, transport infrastructure, the pricing of transport as well as information-based instruments. In addition to consumption, households also save and invest. Investment solutions also affect the carbon footprint of households.

Diets influence people's health and the environmental pressure, which, in turn, is reduced by a diet rich in vegetables in accordance with nutritional recommendations. Choosing between plant- or animal-derived foods, food waste and means of production all contribute to global warming, eutrophication of the environment, growth in loads of contaminants as well as reduction of biodiversity. 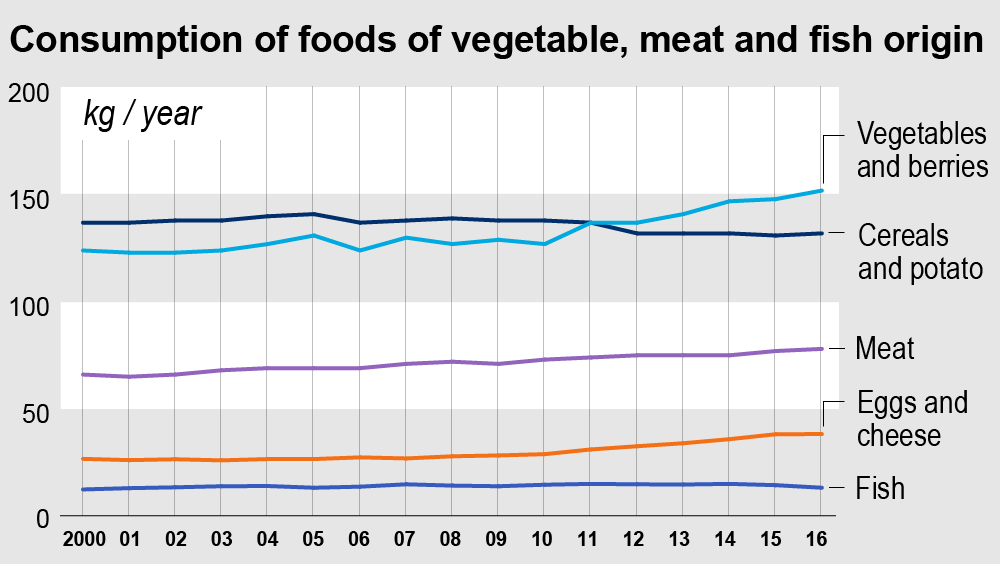 The consumption of meat products increased in the beginning of the 1970s, subsequently levelled off until taking another upward turn in the 1990s. Meat consumption has been growing slightly since the mid-1990s. In recent years, we have consumed around 80 kg of meat each year. Women and young people have begun favouring poultry over beef or pork. The consumption of red meat has remained fairly steady. According to recommendations by the World Health Organisation (WHO), people should not eat more than 500 g of red meat and meat preparations per week. Fish consumption has remained relatively steady from one decade to the next. Vegetable and fruit consumption is steadily growing although there is still some way to go to reach the recommended half a kilogramme per day.

Food production and consumption cause around one fifth of the. carbon footprint of private consumption. Most of the environmental impacts of food are the result of loading caused by fertilisers or directly from animals. It is possible to reduce the environmental impacts of food production to a degree; however, unlike in transport and housing, there are no quickly implemented new technological solutions on the horizon. The environmental impacts of food consumption can be reduced by favouring foods that cause minimal load and by minimising food waste. In households, food waste can be reduced by good planning as well as by increasing consumer awareness about product labelling and the storing and preparation of food. In professional kitchens, food waste can be reduced by good planning and management.

One of the objectives of the national Energy and Climate Strategy is to cut traffic emissions by half by the year 2030 against 2005 level. Domestic traffic accounts for around one fifth of the total greenhouse gas emissions of Finland and around 40% of the emissions of the burden-sharing sector.

Between 2005 and 2015, the amount of CO2 emissions from traffic reduced by 13%. This was mostly due to the use of biofuels, moderate traffic growth and the improved energy efficiency of passenger cars. In 2016, traffic emissions increased due to a decline in the use of biofuels and growth in total number of kilometres driven. 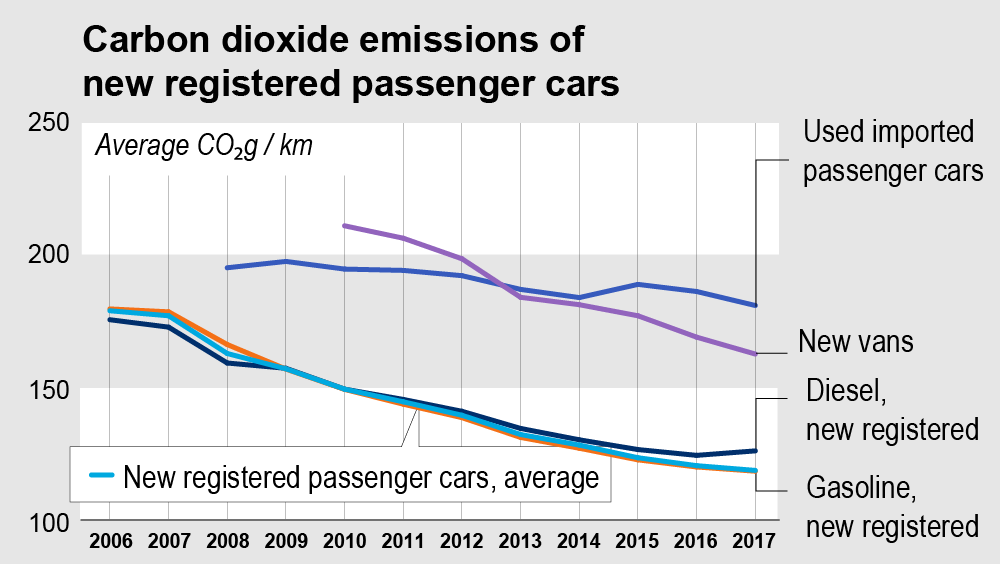 There is a clear increase in the popularity of electric and gas-powered cars in Finland. In 2017, a total of 3,489 passenger cars powered by alternative power sources  (plug-in hybrids and electric, gas-powered, flex-fuel vehicles) were registered for the first time – 117% more than in the previous year. In Finland, there were in total nearly 6,000 fully electric vehicles and plug-in hybrids as well as nearly 3,000 gas-powered vehicles in September 2016.

According to the Medium-term Climate Change Policy Plan for 2030, traffic emissions will be reduced by replacing fossil fuels with renewable and low-emission alternatives as well as by improving the energy efficiency of vehicles and the transport system. An incentive for promoting purchase   of electric cars is available and the conversion of old cars to biofuel and flex-fuel powered vehicles is promoted. At the same time, the construction of electric charging infrastructure and petrol stations selling biogas is accelerated and the number of charging points for electric cars will be sped up in housing companies. The transport systems of urban areas are developed through MAL agreements (land use, housing and transport), supplementary construction is promoted, and jobs and services are directed to transport hubs. Cycling and walking is promoted with a joint programme by urban regions and the state.

The goals set for recycling municipal waste will be stricter. A key aim is to promote the circular economy as well as to reduce the amount of waste that ends up in landfills or is incinerated. In December 2017, the EU was able to reach a preliminary agreement on the amendment of six directives in the waste sector between the member states, the parliament and the commission in tripartite negotiations. The aim is to recycle 55 per cent of all municipal waste in 2025, 60 per cent in 2030 and 65 per cent in 2035. 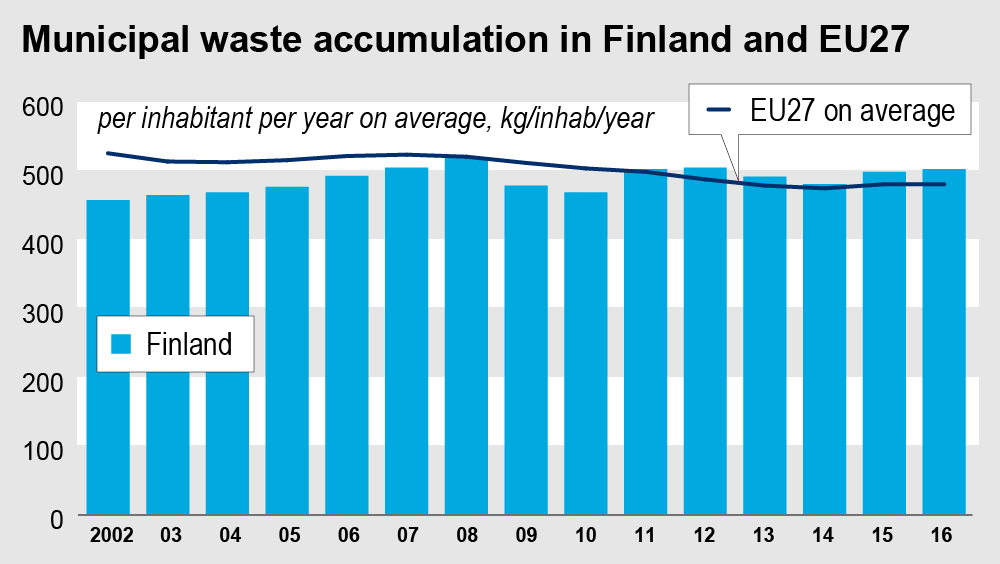 Waste generation can be reduced and recycling increased by measures such as promoting ecological product design, developing producer responsibility schemes s and new business models as well as encouraging people to change their consumption habits. Reduction of food waste carries the most potential in the context of the prevention of biowaste generation. In construction, the use of material can be optimised at the planning stage, by increasing the life cycles of buildings and by using buildings for multiple purposes. According to the EU directive on waste separate collection of textile waste must be set up by 2025.

Despite the fact that the availability of environmental information is exceptionally good in Finland compared to the international level, we have not employed comprehensive and systematically monitored indicators on the effects of public consumption and procurement. Moreover, many of the indicators used for monitoring consumption fail to summarise diverse data, but instead only focus on economic investments or impacts on climate. An indicator for the carbon footprint and material efficiency of consumption is currently under development.

The interpretation text was compiled by Taina Nikula of the Ministry of the Environment.