Based on measurements using various indicators, the state of the environment in Finland has been improving during the previous decades as efforts to cut down the emissions caused by major individual sources of environmental stress have been successful. The focus of environmental protection is shifting from reducing emissions to preventing them, i.e. the promotion of circular economy.

Along with the measures taken in Finland, the state of the environment in the country is affected by factors such as the global climate change, possible spread of alien species in the country's land and water reserves, and the long-distance transport of air pollutants. A growing share of the environmental impacts caused by Finns is also generated outside Finland's borders through international trade, transport and travel.

The management of environmental challenges requires further enhancment of the efficiency of the measures currently undertaken. A rapid reduction in the use of fossil fuels is necessary for combating the worst impacts of climate change. In order to accomplish this, there is a need for internationally coordinated cooperation as well as a fundamental and rapid change in the structures and approaches of the entire Finnish society. It is important that the attempts to solve one problem do not hinder solving other issues. For instance, the use of bioenergy must be promoted in a manner that does not put biodiversity or people's health at risk.

Continuing loss of biodiversity in Finland

Retaining biodiversity is a key indicator for the status of ecosystems. According to the most recent national estimate, around ten per cent of our species are threatened. Species have primarily become threatened as a result of the use of forests and intensification of agriculture. Climate change and new alien species pose growing threats. 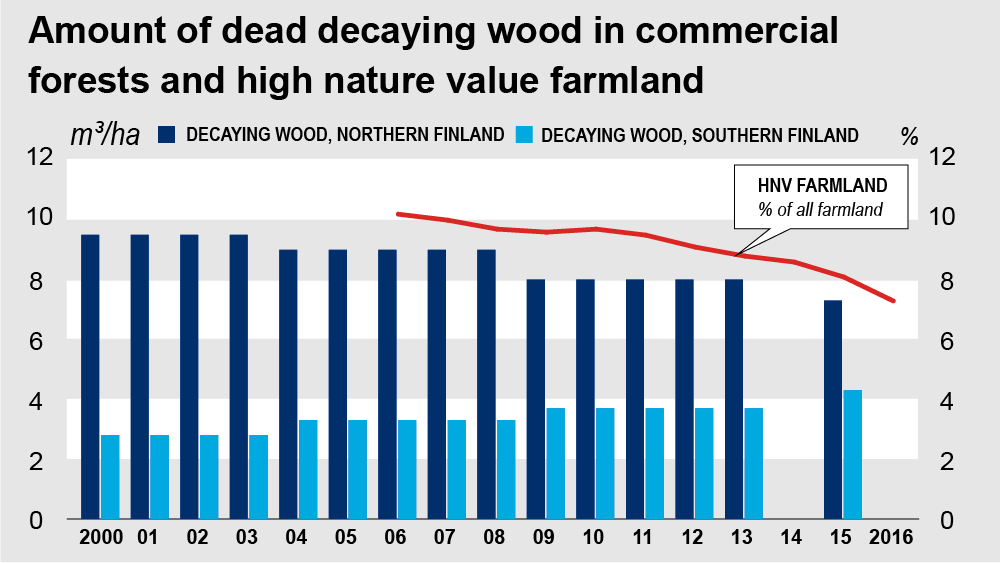 The share of High Nature Value Farmlands depicts the number of agricultural environments that sustain exceptionally high diversity of plant and animal species. A reduction in these areas is primarily caused by a decline in livestock farms, natural grazing areas and permanent pasture lands, particularly in Southern Finland. The extent to which Finland will be able to safeguard agriculture based on small-scale grazing on a relatively large number of farms is essential to the biodiversity of rural nature.

Forests have been exploited in Finland for a long time, which is reflected in the species composition of forests. The amount of dead and decaying wood in forests provides indirect information on the diversity of forest species. The volume of dead wood in forest lands has decreased in Northern Finland and increased in Southern Finland. There are attempts to increase the volume of decaying wood in production forests, for instance, by retaining some trees in logged forests. The trees will eventually die and decay naturally. In Northern Finland, the volume of dead wood has also decreased in protected areas, largely due to a decrease in storm-related damage in recent times.

It is estimated that human activity has accelerated the loss of biodiversity globally 1,000 times faster compared to the natural rate. In Finland, the rate at which the species in forests and rural areas are becoming threatened has slightly decreased in recent decades. However, the species on mires, shores, rocks and fells have become threatened at an accelerated rate. Overall, the attempts to stop species from becoming threatened have failed. Finland is committed to halt biodiversity loss in the country by 2020. If the current trend continues, achieving this objective is unlikely.

The biggest challenges to water protection lie in the management of diffuse pollution, while nutrient runoff from farmland has decreased

Emissions to water systems have been clearly reduced in Finland over the past decades, as the use of the most harmful substances has been prohibited and local sources of emissions have been contained with the help of new pollution abatement technologies. The ecological status of most of the surface areas of lakes (85%) and rivers (65%) is excellent or good. By contrast, only 25% of coastal waters have been rated excellent or good. 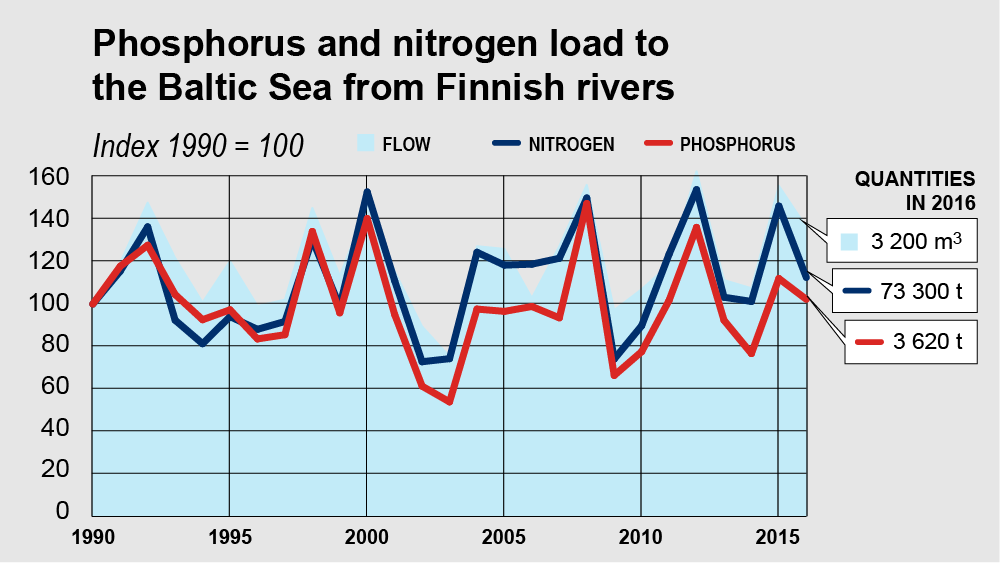 The management of diffuse pollution causes the biggest challenges to water protection. The volume of nutrients carried to the Baltic Sea by rivers has remained relatively similar since the 1970s. The high level of nutrients in rivers is sustained bythe impact of agriculture. The fact that nutrient runoff from fields has been reduced compared to the 1990s is a positive development in the area of agriculture. Natural fluctuations in water flow have a significant effect on nutrient leaching. Changes in rainfall and frost heaving caused by climate change threaten to increase leaching. In connection with climate change adaptation, attention must be paid to water protection efforts by different agents and sources of livelihood at the regional and local levels.

The Baltic Sea continues to suffer from eutrophication, which is also sustained by nutrients accumulated on the seabed over the past centuries. The state of the Archipelago Sea and the Gulf of Finland is particularly worrying. While oil emissions into the Baltic Sea have been reduced, an increase in the frequency of oil and chemical transports heighten the risk of a significant environmental catastrophe. Microplastic pollution has emerged as a new environmental threat. Accomplishing and maintaining a good status of water bodies still requires further measures such as emission abatement and, in some places, also the remediation of water bodies.

Harmful substances emitted to air have clearly decreased in Finland over the previous decades. Acidifying nitrogen emissions have been reduced to less than half and sulphur emissions to one sixth of the status in 1990. There has been a clear decline in most heavy metal and organic compound emissions caused by industry and energy production. By contrast, the efforts to reduce ammonia emissions caused by agriculture have been less effective. Outdoor noise is another problem related to air pollution control that has proven difficult to manage. Nearly one million Finns  suffer from noise pollution . Traffic is the most significant source of noise. 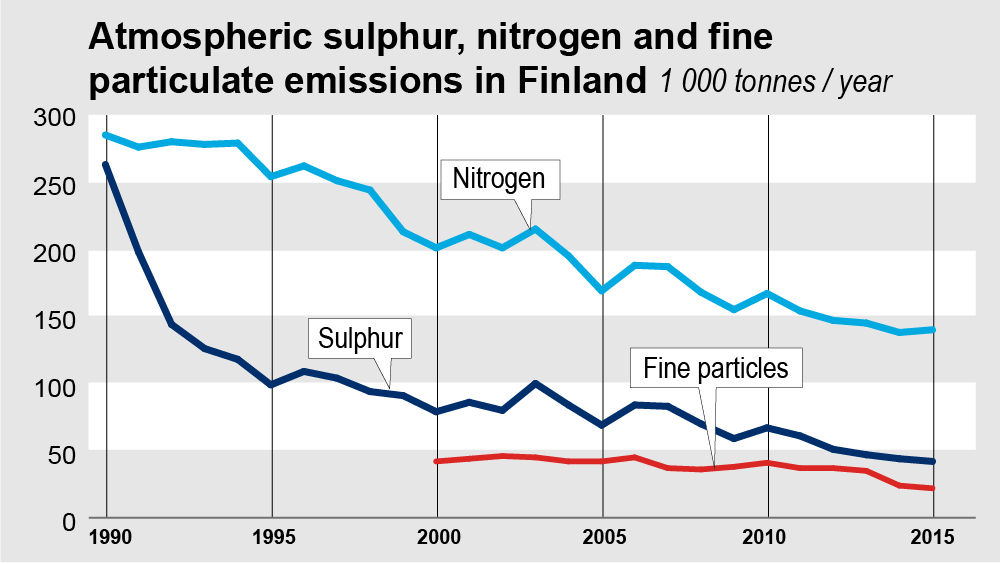 In Finland, outdoor particles have been estimated to cause 1,300 premature deaths and over 600 new, chronic cases of bronchitis each year. Comparable statistics on particle emissions have only been compiled since 2000 with respect to total emissions and the portion of fine particles. The majority of particle emissions originate from energy production and traffic. Fine particles with a diameter of less than 2.5 micrometres are the most harmful for health. Small-scale wood combustion is by far the most significant source of these emissions.  The fireplaces of saunas, cottages and homes currently account for more than one half of fine particle emissions in Finland.

While air quality in Finland is on average very good by international standards, health risks emerge particularly in urban areas where people are exposed to various sources of emissions.

Around EUR 5 billion was spent on environmental protection in 2015

No comprehensive and up-to-date monetary information is available on the costs and benefits of environmental protection. Assessing the extent of external costs related to the state of the environment is particularly difficult. External costs are impacts on third parties not included in the market price of a product or service. Examples of external costs include the health risks caused by the noise and particle pollution of passenger cars or the risks posed to future generations by current greenhouse gas emissions. In addition, no reliable overall assessment is available of the financial benefits gained from environmental protection. A better understanding of external effects could improve policy steering and planning. 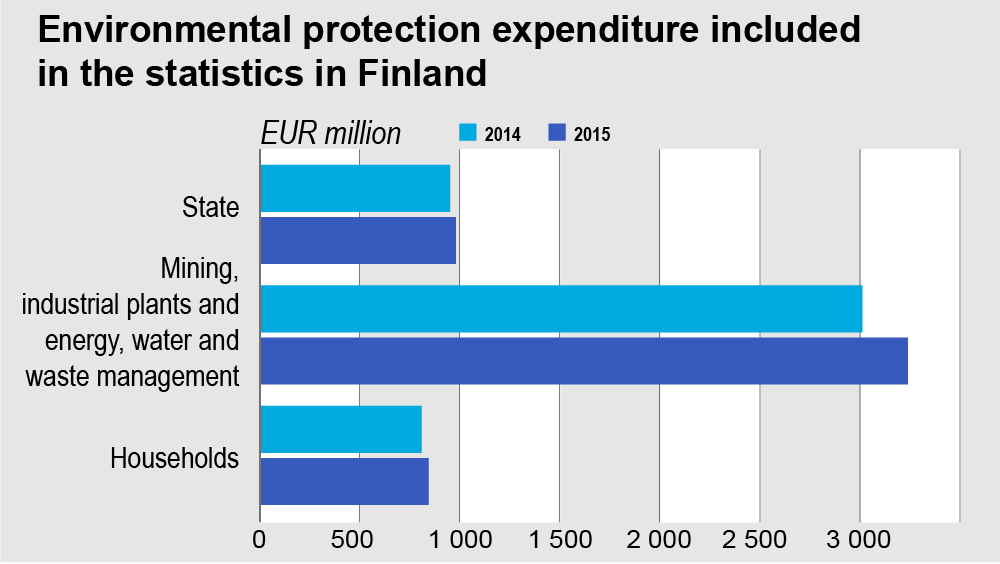 Reservations related to the indicators and their interpretation, and requirements for further research

By global standards, exceptionally comprehensive information on the environment is available in Finland. Nonetheless, our awareness of issues such as the long-term development of biodiversity or the combined effect of harmful chemicals continues to be insufficient. For instance, there is little knowledge of the emissions of substances used in medicating humans and animals and their passage to, and effects on, natural bodies of water.

It is important to conduct comprehensive monitoring of the state of the environment, to seek solutions with multiple benefits, and to set clear objectives. Putting multidimensional environmental problems in an unambiguous order of importance is difficult, particularly after the environmental pollution that immediately threatens the lives or health of people has been curbed.