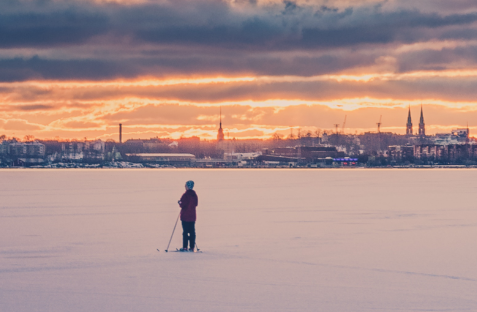 Monitoring basket indicators illustrate the basic factors of a climate neutral and resource-wise economy, such as greenhouse gas emissions, renewable energy, the exploitation of natural resources and public investment to address challenges.

In 2018, Finland's greenhouse gas emissions increased by 2 per cent compared to 2017. Even so, emissions were lower in 2017 than in 2016. The growth in the use of natural gas and peat was the primary factor for the growth of emissions in 2018. Emissions not included in emission trading remained at the previous year’s level, but exceeded the EU set emissions quota by 0.4 million tonnes CO2eq.

Industrial processes and the product use sector accounted for 10 per cent of total emissions in 2018, and their total amount was 5.9 million tonnes of CO2 equivalent, i.e. they remained at the previous year's level. Compared to 1990, these emissions have increased by 10 per cent.

Agriculture accounted for 11 per cent of total emissions in 2018 and its total amount was 6.3 million tonnes of CO2 equivalent. Emissions decreased by 3 per cent compared to the previous year. The decline was due to a poor harvest year and a decrease in the number of animals. Compared to 1990, emissions from agriculture have fallen by almost 16 per cent. The main reason for the decrease in emissions is the reduction in the use of commercial fertilisers. A structural change in agriculture has also contributed to reducing emissions.

Waste treatment accounted for 3 per cent of total emissions in 2018 and the emissions totalled to 1.8 million tonnes of CO2 equivalent. Emissions decreased by 6 per cent from the previous year. The waste sector’s emissions have decreased by more than 62 per cent from what they were in 1990. The actions required by the Waste Act and the Landfill Directive (1999/31/EC) have significantly impacted on the cut in emissions from 1994 onward. After the depositing of biodegradable municipal waste in landfills was banned in 2016, for the most part, only unexploited strata will be disposed of in landfills.

Comparison with other countries

Compared to other EU Member States Finland's status in the attainment of its 2020 target can be viewed in the EEA publication Trend and Projections 2018. (https://www.eea.europa.eu/publications/trends-and-projections-in-europe-2018-climate-and-energy). According to the publication, Finland's efforts to achieve the target would appear credible in proportion.  In the case of many other EU Member States, their relative difference to the EU-set targets are larger, either upwards or downwards.

However, attaining the Paris Agreement’s objective will depend in great part on the world 's largest emitters China and the United States. The EU accounts for less than 10 per cent of global emissions.

Renewable energy accounts for more than 40 per cent of final energy consumption, which is second largest share among the EU Member States

There is a desire to increase the use of renewable energy in order to reduce greenhouse gas emissions and to promote the development related to new energy technologies. The use of renewable sources of energy also promotes the consumption of domestic energy and therefore improves and maintains the security of supply in the energy sector.

Increasing the share of renewable energy and cutting the share of fossil energy sources has been Finland's goal for a long time by now. Renewable sources of energy used in Finland include hydro and wind power, solar energy, geothermal heat, biogas, recycling and waste-derived fuels, wood-based fuels as well as other plant and animal-based fuels. The energy consumption in Finland is affected by the cold climate, long distances and the fairly energy intensive industry structure in Finland.

The goals set for renewable energy at the EU level are determined as the relative share of renewable energy of the final energy consumption. Final use of energy differs from total consumption in that the energy transfer and conversion losses have been subtracted from it. 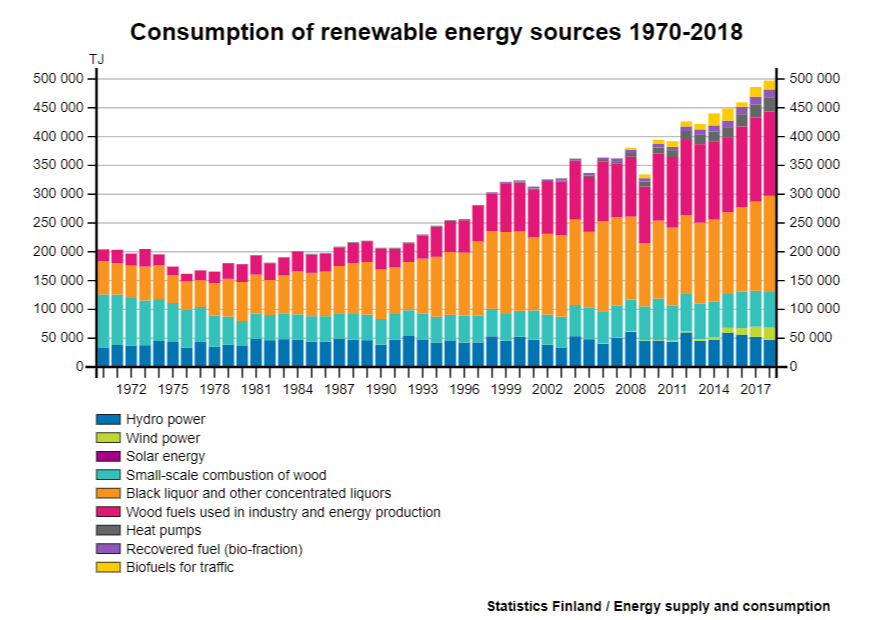 Finland is among the EU's leading countries in the use of renewable energy. The final consumption of renewable energy sources increased by 2 percentage points in 2018, thus rising to a new record level. These accounted for just over 40 per cent of all energy end use.

Around 4/5 of Finland's renewable energy is based on the by-product flows of the forest industry and forest management. New investments in the forest industry also increase the provision of by-products and forest chips used as energy sources. Hydro power accounts for slightly more than 10 per cent of all renewable energy. There has been an increase in the consumption of energy produced by wind power and heat pumps, and transport biofuels in recent years. National measures for reducing traffic emissions are important as traffic is the biggest emission sector outside emission trading.

According to an estimate by the national Energy and Climate Strategy (VNS 7/2016 vp), which has set its sight on the year 2030, renewable energy will contribute to 47 per cent of the final energy consumption in 2030 if no new policy measures are introduced. If policy measures are taken in accordance with the strategy, the share will increase to 50 per cent by 2030 in accordance with our national objectives

Finland uses the second largest share of renewable energy of the EU Member States with 41 per cent. The only country ahead of Finland is Sweden (54.5%). Finland is also second in its share of renewable transport (18.8%) after Sweden (38.6%). The growth in the volume of renewable energy has slowed down in the EU area in recent years. Eleven Member States (incl. Finland) have already reached their 2020 target. Of the other 17 Member States, ten are on or ahead their guideline 2017–2018 trajectories set out in the RED I directive. Seven Member States are lagging behind their emissions trajectories and thus falling short of their 2020 target.

Forests are one of Finland's key natural resources, which is why a simple balance sheet analysis of forest growth and total removals has been selected as one of the indicators for a resource-wise and carbon-neutral economy. 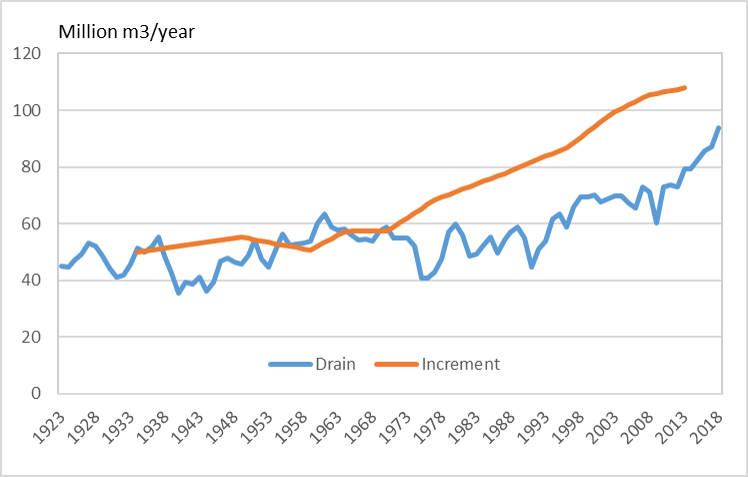 From the beginning of the 1970s, the annual growth rate of trees has been clearly greater than that of depopulation. The annual growth of the standing timber surged in the 1970s, and this development it still ongoing. The increase in the growth of trees is due to things such as improved forest management and the age group structure of forests. Due to active forest management, the total surface area of underproductive forests has decreased immensely compared to the forests of the 1970s. Climate change has also contributed to the growth of trees in Finland. The latest increase in growth measured was 108 million m3 per year. This is nearly double the growth from 50 years ago.

Although the harvesting of stemwood has increased over the past few years, growing stock is still left in the forests yearly to increase growing stock capital and carbon sequestration. For example, in 2018 the volume of trees in our forests increased by about 14 million cubic metres. The most recent measurement on the volume of trees in Finnish forests is 2.5 billion cubic metres. If this amount is compared, for example, to the situation one hundred years ago, the current amount of trees in Finnish forests is 1.7 times larger than in the 1920s.

Active and sustainable forest management will also be required in the future to ensure that trees continue growing in the same manner as they are currently. A favourable development of the biodiversity of forest nature requires the conservation and protection of forests. Forests have become increasingly vulnerable to weather and climate risks. Both the prevention of forest destruction and disease risks and the cultivation of forests as stands with several tree species and mixed forest stands must be promoted to ensure the health, growth and carbon sequestration of the tree population.

Funds provided by Business Finland for resource-efficient and carbon-neutral solutions (incl. energy and environmental projects) will help companies in Finland develop related business activity and grow in the export market. The indicator graph examines the funding provided by Business Finland for resource-wise innovations. The indicator reflects the public sector's investments in the development of solutions. Their share in Business Finland's innovation funding has varied from 45 to 52 per cent during the period under review. 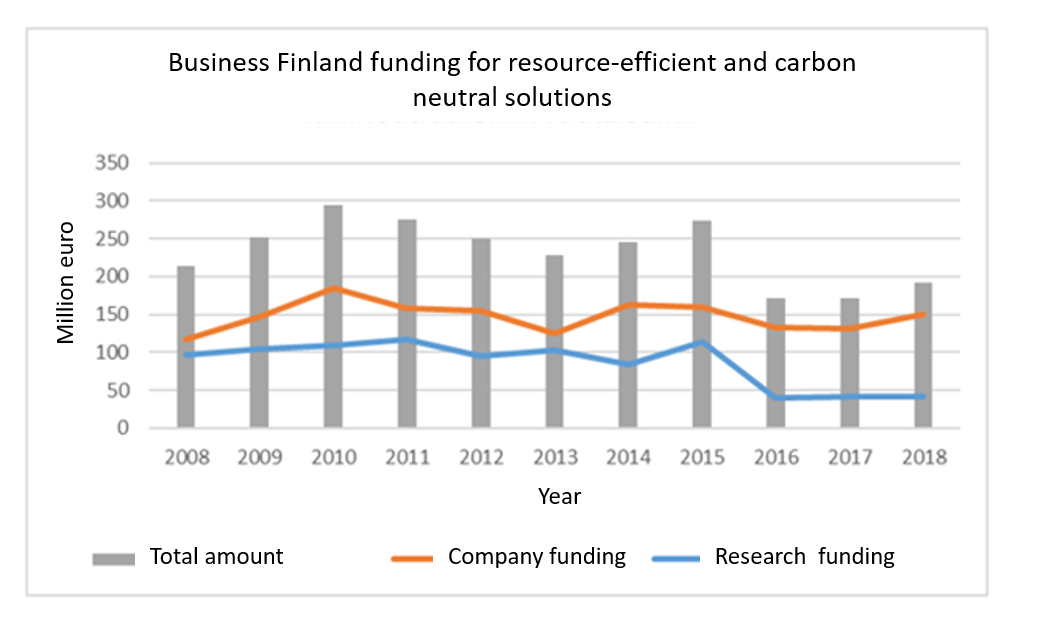 In connection with the government's key projects, Business Finland was provided with the additional authorisations of EU 24 million for the development of new bioeconomy products and services and the promotion of cleantech solutions for small and medium-sized enterprises. Significant openings in the area have also included Business Finland's national Smart Energy, Batteries from Finland, Smart Mobility and Bio and Circular Finland programmes.

Business Finland’s priorities include the strong promotion of innovations in climate-friendly, carbon-neutral and resource-efficient solutions. In recent years, particular effort has been put into building international ecosystems and test platforms.  Business Finland challenges Finnish companies, research groups and public organisations to create global solutions, which are the foundation for competitiveness and success in international markets.

No updates have been made to this indicator meaning that the interpretation text is the same as it was a year ago. The indicator describes the size classes of resource use structure. It has been determined that it is unnecessary to update the indicator annually, and annual fluctuations are particularly caused by economic cycles both in construction and in other economies.

The largest mass-based raw materials use category comprises different soil material of which around 100 million tonnes is exploited annually for purposes such as road construction and other needs pertaining to the infrastructure and construction. Construction is also a significant application in other EU countries.

Fossil fuels form the second-largest category for raw material consumption. In addition, some of the production by-product flows resulting from raw wood material use, such as chips or waste liquors from the forest industry, are utilised as energy.