The Center for Global Development – a non-governmental organisation – uses the Commitment to Development Index (CDI) to rank 27 of the world's richest countries on their committed to improving the status of people living in the poorest countries. The part of the index that relates to trade policy was chosen as an indicator for the global responsibility basket because it is of the utmost importance that developing countries participate in international trade and benefit from it. The index comprises four areas: 1) tariffs against imports from developing countries (weight 40%); 2) regulation of import (weight 25%); 3) openness of trade in services (weight 25%); 4) agricultural subsidies (weight 10%). Increasing the exports of developing countries and improving market access for them, especially for the least developed countries, has also been recorded in the UN's Sustainable Development Goals.

Finland scored a value of 5.30 in the 2018 CDI measuring trade policy, whereas its score the previous year was 5.37. In 2018, Finland ranked ninth in the index measuring trade. The countries that placed ahead of Finland were other EU Member States as well as Australia and New Zealand. The better position of the EU Member States that rate higher than Finland in the index is mainly due to their better figures on the openness of trade in services.

Trade policy is an important part of Finland's foreign and security policy. Finland participates actively in the implementation of the clauses on trade and sustainable development in the EU's free trade agreements, for example, by promoting exports of environmental products and by working actively to eliminate fossil fuel subsidies at the international level. Trade policy can also be used to improve market access for products from developing countries to enable these countries to better integrate into global value chains. As part of the EU's common commercial policy, Finland unilaterally grants tariff preferences to developing countries.

Finland's development trend in the basket is mildly rising. Finland’s standing had altered between 12th and 8th from 2003 to 2018. In the first years of the assessment (2003-2004), Finland's average score was 4.55. Over the past few years, Finland has ranked in the top third of the reference countries and has been among the best 50% of countries since 2003.

Finland's economy is based on foreign trade, which has grown fairly steadily in the long term. It is not only an increase in euros – trade has also grown when measured in tonnes, although over the past ten years the trend has remained fairly unchanged. The tonnage of foreign direct contributions has always been higher than the tonnage of goods exported. In other words, Finland imports significant amounts of material from abroad. In the past few years, service exports have grown considerably faster than the export of goods and the share of trade in services has grown in all trade. There has been no significant change compared to last year.

Finland imports, in particular fossil energy materials, as well as metals and minerals while it exports a significant amount of renewable wood, wood processed products and biomass and biomass products. Of imported fossil energy materials, especially coal and crude oil are emphasised, the latter of which is for the most part further exported in refined products Because a rapid reduction in the use of fossil fuels is necessary to mitigate climate change, it can be expected that the imports of fossil materials will decline.

The material flows of many products include so-called hidden flows. The hidden flows associated with imports consist of such direct and indirect material and energy inputs made abroad in the extraction and manufacture of imports that are not visible in the weight of the raw materials and products. Hidden flows can include, for example, land use and the greenhouse gas emissions inflicted by the production process in the country of origin. The hidden flows of imports may be manifold compared with the direct inputs. The amount of hidden flows in tonnes does not, however, as such reveal how sustainably the product or raw material has been manufactured as the production conditions may vary a lot between countries and within countries, even between individual factories.

It is important to acknowledge that along with the increased  foreign trade, also a considerable part of the environmental effects caused by Finns are now causedoutside our national borders. On the other hand, many of the products imported to Finland are further processed into export products. As production in Finland is on average more ecologically and socially sustainable than in many other countries, no unambiguously negative or positive conclusions can be drawn by examining solely material flows.

Although direct comparisons of country-specific material flows are challenging due to the varying nature of national economies, it can generally be said that the material flows resulting from Finland's foreign trade are significant for a small country. Overall, Finland's specialisation in sectors such as oil refining and the forest industry is reflected in extensive material flows. These material flows are further boosted by the mining industry, which has experienced strong growth in Finland in recent years and in which large material masses are mobilised.

Like many other countries, Finland has outsourced raw materials production and the manufacture of labour-intensive products to countries with a relative advantage or to countries with natural resources that Finland does not have.

No direct resource efficiency targets have been set globally. SDG 12 aims to ensure responsible consumption, which is linked to sustainable production and consumption, sets indirect obligations for countries.

Under Sitra's leadership, Finland is the first country in the world to have developed its own national circular economy road map in 2016, the aim of which is a resource-efficient and carbon-neutral Finland. This has been updated in 2018-2019, and the Circular Economy 2.0 road map aims for four transitions: 1) The foundation of competitiveness and vitality will be reformed, which will allow circular economy solutions to be placed at the centre of the competitiveness and economic growth strategy, 2) Finland will transition to low-carbon energy, 3) Natural resources will be seen as scarce, and 4) We will adopt a new approach to ownership at the individual level from the perspective of culture, taxes and income distribution. 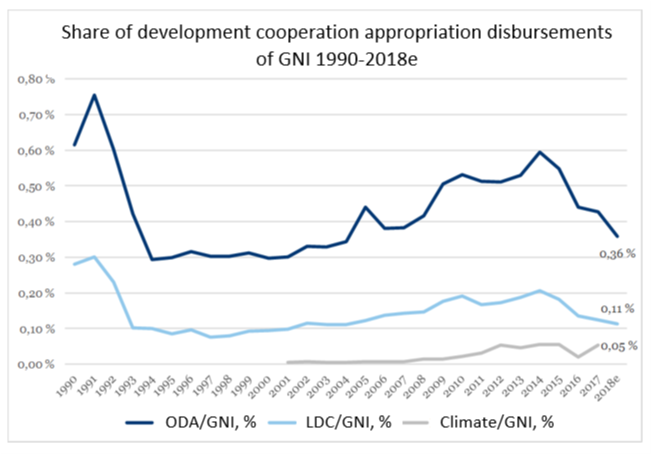 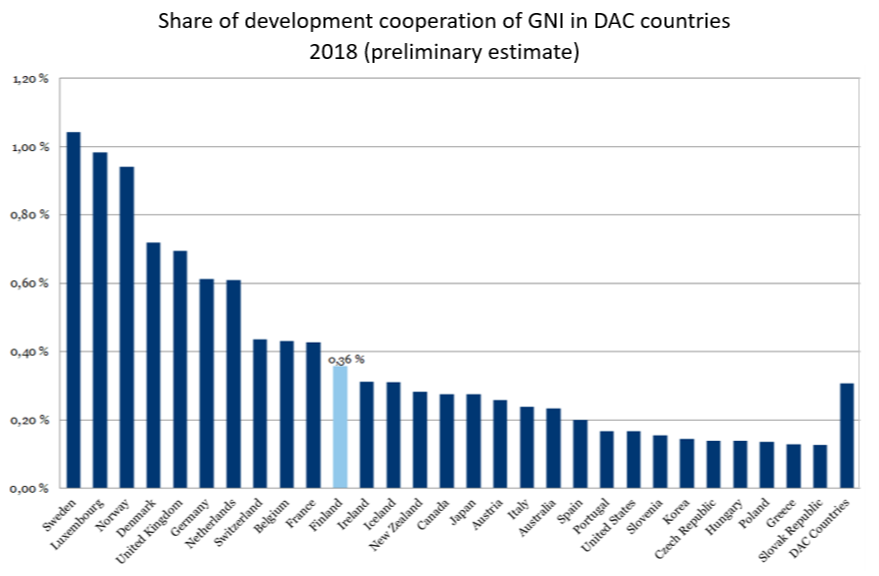 Even so, the aid provided to developing countries by Finland and other donors has contributed to the attainment of development goals. The percentage of the world population living in extreme poverty has halved since 1990. The vast majority of girls and boys can go to school. The mortality rate among mothers and children under five years of age has decreased significantly. The number of people living without water supply and sewerage has halved. The foundations of the economy have improved in the vast majority of developing countries, the share of development aid in their income has declined and there are also other ways for these countries to obtain funding to support their development. For example, in many cases the impact of private investments is manifold in the promotion of sustainable development in developing countries.

Finland is committed to increasing its development cooperation appropriations to 0.7 per cent of the gross national income in the long term. The target was close in 2014, when the figure was 0.59 per cent. Cuts in 2016 as part of the balancing of government finances changed the situation significantly.

The development cooperation expenditure of 17 OECD Development Assistance Committee member countries grew. The largest increases were made by Iceland, Hungary and New Zealand. At the same time expenditure dropped in 12 countries. In addition to Finland, the largest cuts in expenditure were made in Italy, Austria, Japan, Greece and Portugal. The principal reason for this drop was a decrease in the expenditure considered development aid for refugees and asylum seekers.

According to the target set by the UN, 0.15-0.2 per cent of the national income should be directed to the poorest countries in aid. Finland's funding to the least developed countries (LDC countries, LDC/GNI in the graph) represented 0.11 per cent of gross national income in 2018. In 2015, the share of LDC funding was 0.18 per cent, but it declined in the following years due to considerable cuts in appropriations. Finland is still committed to the target of 0.2 per cent and is striving to reach it.

The climate finance provided byFinland has mainly been rising in the 21st century. At UN Climate Conference in Copenhagen in 2009, an agreement on so-called short-term climate financing was adopted.The developed countries committed together to finance climate action in developing countries with a total amount of USD 30 billion between 2010 and 2012. In addition, it was agreed that the funding mobilised by developed countries would be increased to USD 100 billion a year by 2020. At the Paris Climate Conference in 2015, this joint commitment by industrialised countries was extended until 2025, when a new funding target will be set.

In recent years, the level of climate finance has fluctuated partly due to cuts in appropriations and partly due to new investments. In 2017, the level of climate finance increased due to the establishment of a joint climate fund  of Finland and the International Finance Corporation (IFC). The fund supports renewable and clean energy solutions and climate projects in developing countries. All in all, Finland channelled EUR 114 million to the fund in a financial investments for the duration of 25 years. The IFC climate fund’s first disbursement was made in 2017, totalling EUR 68 million. There were no similar major support investments in 2018, and Finland's GNI share of climate finance was 0.02%.

Finland participates actively in international crisis management. Participation is based on the priorities of Finland's foreign and security policy. Finland implements and promotes a comprehensive approach to crisis management. Improving security and stability in conflict areas and strengthening the skills and capacity of countries affected by the conflict are essential. The increase in stability and security will improve living opportunities and conditions locally and will help facilitate economic and social development.

During last ten years, which is the period under review, Finland's crisis management participation was at its highest at the beginning of the period, in 2008-2009 (some 700-750 soldiers) and at its lowest in 2011 (some 250 soldiers). Peace and security are at the core of the 2030 Agenda - "there is no sustainable development without peace and there is no peace without sustainable development". Finland last confirmed its commitments on peacekeeping participation in March at the 2019 Peacekeeping Ministerial Conference.

Observations and updates to previous years

The Global Basket’s indicators have not been changed from last year.